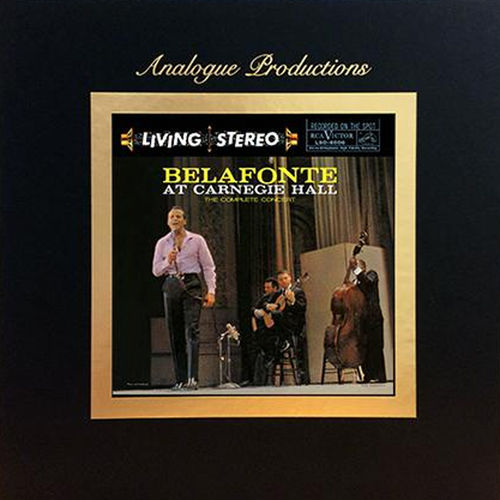 5LP 45RPM set includes bonus tracks previously unavailable on vinyl!
Mastered by Ryan K. Smith at Sterling Sound from the original 3-track analog tapes!
200-gram LPs cut at 45 RPM, plating by Gary Salstrom, pressing at Quality Record Pressings!
Custom designed slipcase box
Described by reviewers as "the quintessential Belafonte package," Belafonte at Carnegie Hall captures the excitement of a Harry Belafonte concert at the height of his popularity. What Analogue Productions has done with this 5LP 45 RPM box set release exceeds other vinyl versions.
We've included the entire concert. The fifth disc in this premium set includes tracks heretofore missing from prior editions due to space limitations. They include Belafonte's spoken introduction before launching into the touching and tender "Scarlet Ribbons," followed by the orchestral overture.
What AllMusic.com describes as "The grandaddy of all live albums," was an anomaly at a time when only comedy albums were recorded outside of the studio environment. A major financial and artistic success, the live performance stayed on the best-selling album charts for over three years and remained in print until RCA discontinued pressing LPs.
The concert is divided in three sections: "Moods of the American Negro," "In the Caribbean," and "Around the World." All the hits are here: "Day O," "Jamaica Farewell," "Mama Look a Boo Boo," and others, plus calypso, folk songs, chain gang songs, spirituals, and songs from other lands, representing a veritable best-of package of Belafonte's first decade with RCA Victor.
Wait no more if you haven't heard this marvelous record. We've gone all out for this deluxe reissue. Starting with premier mastering by Ryan K. Smith at Sterling Sound from the original analog tapes. Spread over 5 LPs, the wider-spaced grooves reduce distortion and high frequency loss and let your stereo cartridge track more accurately.
Plating and pressing is by Gary Salstrom and the crew at Quality Record Pressings, where the finest quality LPs in the world are pressed. But it doesn't stop there: We've enhanced the original studio photography and housed the collection in a custom-designed slipcase box.
Belafonte's mastery in front of an audience was never better displayed than here, a mastery that resulted in him becoming one of the most popular concert draws in history. From the opening trumpet fanfare to the epic 12-minute version of "Matilda" (which set a standard for audience participation), the album never lets up!
Disc 1
Side 1
Introduction/ Darlin’ Cora
Sylvie
Cotton Fields
Side 2
John Henry
Take My Mother Home
Disc 2
Side 1
The Marching Saints
Day O
Jamaica Farewell
Side 2
Man Piaba
All My Trials
Disc 3
Side 1
Mama Look A Boo Boo
Come Back Liza
Man Smart (Woman Smarter)
Side 2
Hava Nadeela
Danny Boy
Merci Bon Dieu
Disc 4
Side 1
Cu Cu Ru Cu Cu Paloma
Shenandoah
Side 2
Matilda
Disc 5
Side 1
Harry Belafonte (Spoken Intro)
Scarlet Ribbons
Side 2
Overture Medley (Instrumental) 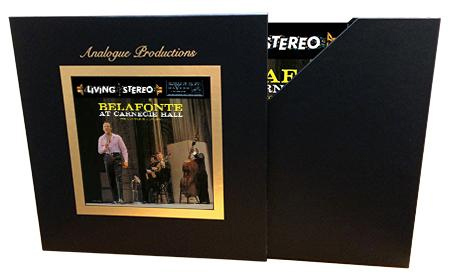