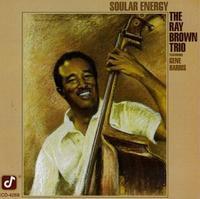 Whatever the source it sounded very good as did the Bellaphon and King Records edition, but none of them come even remotely close to this new double 45rpm edition mastered by Kevin Gray at his Cohearent Mastering and pressed on 200g vinyl at QRP. - Michael Fremmer

Halfway through my mental deliberations and the down-selection process for picking my R2D4s, a light went on in my brain: Instead of deciding which CD or LP I couldn't live without, why not just acknowledge one that I actually don't live without?
Every review, every setup and optimization procedure—indeed, just about every listening session I conduct—includes the Ray Brown Trio's Soular Energy. It's an amazing collection of jazz standards played by Brown, Gene Harris on piano, and Gerryck King on drums, with killer cameo performances by Red Holloway on tenor sax and Emily Remler on guitar. This disc has it all: wonderful, accessible tunes, great arrangements, virtuoso playing, superb, rich sound, a deep and open 3D soundstage—you name it. It's one of those discs that everyone likes and that makes any system sound its best. What's more, there are layers upon layers of detail and nuance, so any improvement renders the disc new and magical again. but to really appreciate the performance, beg, borrow, or steal a copy  and cue it up on one of today's top turntables. Fantastic! - stereophile.

This is simple, if you don’t have a pressing of “Soular Energy” you need one and here is the best one I have heard - Dagogo,

Ray Brown, Gene Harris and Gerryck King are spectacular in this 1984 recording. Red Holloway (tenor sax) and a rare appearance by the great Emily Remler (guitar) round out the original musicians. This is a completely new mastering and pressing of this famous release.

Kevin Gray at Cohearent Audio did exceptional mastering work for this new double LP, cut at 45 RPM, and pressed by none other than the world's finest LP manufacturing plant, Quality Record Pressings.

Gary Salstrom, QRP's general manager and master plating technician, plated the lacquers, and lastly the artwork is redesigned for this deluxe gatefold jacket presentation. "This album is important as an early milestone in  Gene Harris' second career. Harris, who had led the popular Three Sounds in the 1960s, had been living in obscurity in Boise, ID, for several years before he was urged by bassist Ray Brown to come to the West Coast for some recording sessions. Harris became a permanent member of Brown's regular trio for quite a few years before launching his own quartet.

He had lost none of his technique, soul, or swing in the interim, as he shows throughout this fine release.

Seven of the eight numbers (highlighted by 'Exactly Like You,' 'Teach Me Tonight,' and 'Sweet Georgia Brown') feature Brown, Harris, and drummer Gerryck King playing soulful bop, while 'Mistreated But Undefeated Blues' adds guitarist Emily Remler and the tenor of Red Holloway. An excellent effort."

This is one of my favorite LPs of all time. ... My heart literally skipped a beat when I saw that Analogue Productions was bringing us a 200 gram, 45 RPM version of this LP. To top it off, it would be pressed at the new Quality Record Pressings plant and be mastered by Kevin Gray. One more thing, at its price  it's a bargain compared to what near mint or mint original Concord pressings are going for, much less the ridiculous price of the Japan pressing. ... This reissue does everything the original does, but it does it better. First, as quiet as my copy was, this pressing just allows the music to appear in my room with no hint that it is being played off vinyl. Second, there is just something relaxing about the sound of a well-done 45 RPM pressing. It loses none of its presence, clarity or transient speed, but at the same time it is more relaxed and simply sounds more beautiful." — Jack Roberts, dagogo.com

"Soular Energy with the Ray Brown Trio, originally issued on Concord in 1985, has long been considered both great straight ahead jazz and an audiophile treasure. ... none (of the previous reissues) come even remotely close to this new double 45 RPM edition mastered by Kevin Gray at his Cohearent Mastering and pressed on 200 gram vinyl at QRP. ... It has never sounded better than it does on this double 45. The room is small, the miking close, the sonic excitement intense! The longevity of this record's popularity and so many others on Concord proves that while Carl E. Jefferson was a used car salesman turned record company owner, he did not sell lemons! Very highly recommended!" Music = 8/11; Sound = 10/11 - Michael Fremer, 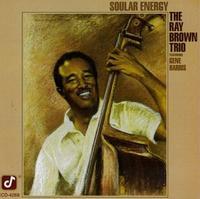