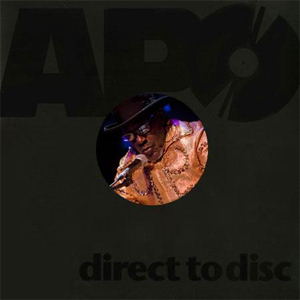 Cutting engineer — Kevin Gray
Eighty-five-year-old Hosea Hargrove played gigs through decades with such bright blues lights as Stevie Ray and Jimmie Vaughan, but it took until age 70 before the Austin-based bluesman finally settled into a recording studio to lay down tracks.
Now that he's retired from working as a dishwasher and an aide for the disabled, he's enjoying himself playing his black Telecaster and looking for dance partners. This member of the Texas Music Hall of Fame (2008) plays in an unmistakable Lone Star-style but there is a hypnotic quality to his music and he literally sets his own beat.
Hosea teams up here with Birdlegg, the stage name of the irrepressible Gene Pittman, who years ago made his way to Oakland, California, and plied his trademark harmonica skills at Eli's Mile High Club and other west coast venues. Now lving in Austin, Birdlegg is a whirling, twisting, dancing harp player who paces the stage.
Hosea sings and you feel it deep in your gut. Birdlegg's harmonica scorches; together they're dynamite.
Side 1
Hosea Hargrove
1. Hoochie Coochie Man
2. Southern Country Boy
3. I’m In Love With You Baby
Side 2
Birdlegg
4. Down In My Shoes
5. You Upset My Mind
6. Restraining Order Blues
Browse this category: BLUES SOUL R&B
Contact information
Hosea Hargrove - Hosea Hargrove and Birdlegg - Direct To Disc - D2D 200g LP - SCOTT NANGLE AUDIO
T&C's and Privacy Policy