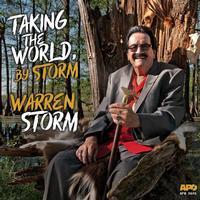 Swamp pop pioneer and Louisiana legend Warren Storm returns - Louisiana and Texas' Music Hall of Fame inductee
Mastered by Ryan K. Smith at Sterling Sound from analog tape recording -Plated and pressed at Quality Record Pressings
Old-style heavyweight tip-on gatefold jacket from Stoughton Printing
Warren "Storm" Schexnider is a Louisiana legend. At age 82 when this album was recorded, he's been creating music for more than 70 years — a milestone that's dubbed him the "Godfather of Swamp Pop" for his fealty to the indigenous music of the Acadiana region of south Louisiana and southeast Texas. Created in the 1950s and early 1960s by teenage Cajuns, swamp pop combines New Orleans-style rhythm and blues, country and western, and traditional French Louisiana musical influences.
Warren throughout his career has recorded on innumerable records, both on his own as a vocalist/musician, and as a studio musician on other albums. He continues to blaze a path for younger musicians, which is why one could say the universe had a plan that resulted in the album Taking the World, by Storm, new from APO Records. Recorded at Dockside Studio, Maurice, Louisiana in March 2019, the album was produced by Yvette Landry and executive producer Chad Kassem. Mastering was by Ryan K. Smith at Sterling Sound in Nashville.
Warren Storm grew up in a Cajun household (he spoke only French until the third grade!) surrounded by music. His father, an Abbeville, Louisiana native, was a drummer, fiddler, and accordian player who indoctrinated his then 12-year-old son Warren into the biz with an impromptu Rayne-Bo Ramblers gig. By age 15, Warren was playing drums with Larry Brasso's Rhythm-aires. Throughout his adolescence Warren played with various dance hall bands, including with Fats Domino's drummer Charlie "Hungry" Williams. Warren became known as the top session drummer in the area; then just after graduation from Abbeville High School, Warren signed a recording contract. His first record, a 7-inch released in 1958, containing "The Prisoner's Song," b/w "Mama, Mama, Mama" sold a quarter of a million copies. His subsequent hits "So Long, So Long, (Goodbye, Goodbye)," "Birmingham Bar," "Lord, I Need Somebody Bad Tonight," "Things Have Gone To Pieces" and more led to Warren's induction into both Louisiana and Texas' Music Hall of Fame.
Yvette Landry, a singer-songwriter and musician, grew up in Breaux Bridge, Louisiana not far from the levees of the Atchafalaya Basin, North America's largest swampland. She fronts her own band, The Yvette Landry Band, and her debut award-winning album titled Should Have Known was released in 2010. (The album was named Offbeat Magazine's "Best Country/Folk Album" and Landry "Best Country/Folk Artist") She's been a familiar presence on stages at countless cultural festivals and venues — from the New Orleans Jazz and Heritage Festival to the Bluebird Café in Nashville.
Still, when Warren Storm strolled unannounced into a gig she was playing in the spring of 2018, Yvette was at once a little nervous and starstruck.
When prodded to sing a signature tune of Warren's, "I Need Somebody Bad," off her newly-released album, she says, "I shut my eyes and belted it out." At the end of the night Warren approached her, shook her hand and said "I never heard a girl sing that song before. You did real good. Think I could have a copy?"
She complied and a friendship blossomed. As Warren thumbed through his accumulated memoriabilia Landry began noticing who she was seeing in photos: Willie Nelson, Ray Price, Hank Williams, Jr., Elvis and others.
The idea was born to compile Warren's stories and pictures for a book about his career spent performing with, and opening for some of the finest musicians in the world. That book became Taking the World, by Storm — A Conversation with Warren "Storm" Schexnider, The Godfather of Swamp Pop.
When the idea was proposed to reissue one of Warren's previous albums to accompany the book, Yvette and those working with her on the project went one bettter: record a new album with Warren, live in the studio, straight to 2-track tape, "just like he did in his early days." And so the recording process began. Next to become involved was Acoustic Sounds and APO Records owner Chad Kassem, who arranged for the album to appear on the APO label, to be mastered by Ryan K. Smith at Sterling Sound in Nashville, and to be plated and pressed on vinyl at Quality Record Pressings, renowned among audiophiles and music professionals for its fine-sounding LPs.
For Chad, born and raised in Lafayette in south Louisiana, the music of Warren Storm was as familiar growing up as the climate and culture of his homeland. To have the opportunity to participate in such a one-of-a-kind project is exceptional, he says.
The core band for this album is a veteran experienced crew: Eric Adcock (piano), Roddie Romero (electric guitar), Derek Huston (saxophone), Chris French (upright bass), and Gary Usie (drums). Special guests include vocalist Marc Broussard ("Mathilda"), Sonny Landreth (slide guitar on "Mathilda"), Beau Thomas (fiddle) and Richard Comeaux (pedal steel) on "Tennessee Blues, and Willie "Tee" Trahan (tenor saxophone on "In My Moments Of Sorrow" and "Troubles, Troubles"). Yvette Landry also sings with Warren on "Mama, Mama, Mama.
Lastly, the one-and-only John Fogerty (Creedence Clearwater Revival) was gracious enough to lend a backing vocal to Warren's performance of "Long As I Can See The Light." Warren recorded a video with John in the mid-1980s and remains a huge fan of John's.
Warren Storm is a legend in Louisiana music, a swamp pop pioneer. As Yvette says, "He is a master who sings with excitement (like it was his first time) and reverence (like it is his last time)." Enjoy this musical gem and tribute to the swamp pop genre.
Side 1
1. Long As I Can See The Light
2. Mathilda
3. Lonely Nights
4. Let The Four Winds Blow
5. Tennessee Blues
Side 2
1. Mama, Mama, Mama
2. In My Moments of Sorrow
3. Prisoner’s Song
4. My House of Memories
5. Troubles, Troubles
6. Raining in My Heart