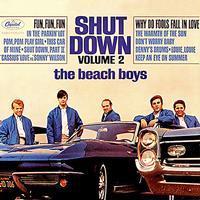 "The sound is rich in detail, yet one of its key strengths is how "mellow and romantic" it sounds. While listening to these records, I was never fatigued. ... the AP Beach Boys significantly betters the original U.S. Capitol pressings that I've heard, with considerably more separation, detail, fullness and presence." — Jeff Wilson, The Absolute Sound,
These reissues restore whatever was really on the tapes — and given who was involved and where they were recorded, you can be sure the bass heard on these reissues was not added by Kevin Gray. ... As for the quality of these reissues, it's quite clear that, whether or not you like the sonic results, Analogue Productions sets the reissue standard. The company insists upon using analog master tapes (where available), not analog copies, it uses the best available artwork, and packages in 'Tip-on'TM jackets. It masters where the tapes are located using Kevin Gray in California, Ryan K. Smith in New York and Willem Makkee in Germany." — Michael Fremer, AnalogPlanet.com
The ultimate pressings of the Beach Boys discography from Analogue Productions
Mono mixes created under Brian Wilson's supervision
One of 10 titles featuring 33 1/3 mono and stereo remastered editions: Surfin' USA, Surfer Girl, Little Deuce Coupe, Shut Down Vol. 2, All Summer Long, Today!, Summer Days (And Summer Nights!!), Beach Boys Party!, Pet Sounds and Smiley Smile
Audio production — Mark Linett - For Brother Records — Elliott Lott
Mastered by Kevin Gray at Cohearent Audio, most from the original master tapes or best sources available
Lacquer plating by Gary Salstrom and 200-gram vinyl pressing by Quality Record Pressings!
"These are the best sounding and best-looking versions of the Beach Boys records that have ever been produced. We want everything about these to be better than the original."
To meet the standards of Analogue Productions, our Beach Boys album reissues had a mission to achieve: Present the band's music the way that Brian Wilson — famed co-founder, songwriter and arranger — intended. Mono mixes created under Wilson’s supervision were how the surf rockin’ California crew rose to fame! And we’ve got ‘em!
For the early part of the Beach Boys career, all of their singles were mixed and mastered and released only in the mono format — they didn't release a single in stereo until 1968. In those days, hits were made on AM radio in mono. And the mono of those times worked well for Wilson, who suffers from partial deafness. Still, apart from Surfin' Safari, which was mono only, the Beach Boys did turn in stereo masters on all of their early albums up until 1965. The Beach Boys Today! was the first LP for which they only delivered a mono master.
The stereo editions of Surfin' USA, Surfer Girl, Little Deuce Coupe, Shut Down Vol. 2, All Summer Long, Beach Boys Christmas Album and Beach Boys Concert were all mixed in stereo by their own preferred engineer, Chuck Britz, ostensibly under the group's supervision.
"Brian may or may not have been present for those mixing sessions — evidence suggests that he trusted Chuck's skills enough to let him prepare those mixes on his own — but the group held onto their multitrack tapes and delivered stereo masters to Capitol, rather than allowing Capitol to prepare their own stereo versions. Later, when Brian was only delivering mono masters, Capitol would prepare the Duophonic pseudo stereo editions for the stereo market," says Alan Boyd, producer and Beach Boys' archivist.
All of the newer stereo mixes on these remastered albums (The Beach Boys Today!, Summer Days (And Summer Nights!!), The Beach Boys' Party, Pet Sounds and Smiley Smile) were all done by Mark Linett on behalf of the Beach Boys.
Still, bottom line, the mono mixes were where Brian Wilson paid intense attention, and the dedication paid off!
We’ve taken 10 of the most classic, best-sounding Beach Boy titles ever and restored them to their mono glory!
But there’s no disputing that the close harmonies and one-of-a-kind rhythms of hits like “Surfer Girl,” “In My Room,” “Little Deuce Coupe” and more lend themselves naturally to stereo. So we’ve got your 2-channel needs covered with prime stereo mix versions as well.
Mastered by Kevin Gray, most from the original master tapes, and plated and pressed by Quality Record Pressings, the finest LP pressing facility in the world, these are awesome recordings to experience. And the look of each album befits its sonic superiority! Presented in "old school" Stoughton tip-on jackets, these time honored favorites shine brighter than the originals!
The first Shut Down was a hugely successful Capitol Records Various Artists compilation LP that had included a pair of Beach Boys tracks. Whereas their previous album Little Deuce Coupe had been a full-on car themed concept album, the Beach Boys' Shut Down Volume 2 was pretty much evenly split between songs with car themes and various high school and summertime-themed tunes. The album sought to further the Beach Boys beyond its ironic sea-and-sun fetish (none but Dennis Wilson ever surfed) into the burgeoning hot-rod subculture. "... the high points remain nothing short of spectacular, including the Mike Love-propelled 'Fun, Fun, Fun,' Wilson's knowing nod to Phil Spector, 'Don't Worry Baby,' and the (hit) 'The Warmth of the Sun.'"
1.   Fun, Fun, Fun
2.   Don’t Worry Baby
3.   In The Parkin’ Lot
4.   “Cassius” Love Vs “Sonny” Wilson
5.   The Warmth Of The Sun
6.   This Car Is Mine
7.   Why Do Fools Fall In Love
8.   Pom, Pom Play Girl
9.   Keep An Eye On Summer
10.   Shut Down, Part II
11.   Louie, Louie
12.   Denny’s Drums 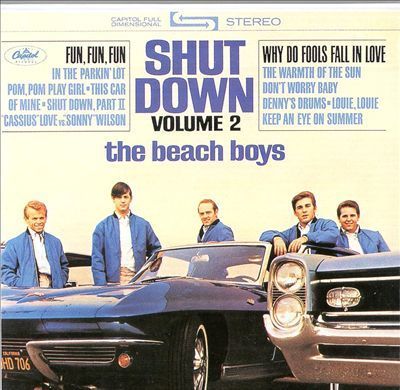