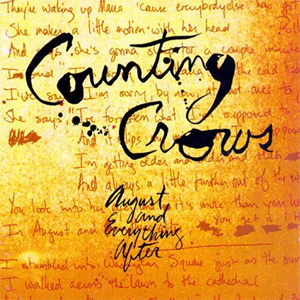 Said to reflect Adam's Duritz's life since birth, August and Everything After speaks of the circles of life ("Omaha"), of excess ("Rain King") and loneliness ("Time and Time Again") and living with memories ("Ghost Train"). Each time I listen my soul wanders through the desolate plains and dances into Adam's words of wanting, of waiting, of being. At the suggestion of Robbie Robertson, Counting Crows recorded at a house where they lived together. It created an interplay in the music, a comfortable assurance. You can feel them grooving off each other. The poetic lyrics, reminiscent of T.S. Eliot's Four Quartets, are delivered with the honesty of illusion and disillusion. Listening is like being wrapped in a warm fog www.stereophile.com

Mono & Stereo magazine's reviewer Matej Isak says  Quality Record Pressings pressing plant "goes beyond simple vinyl revival." "As (it is) for many, August And Everything After is my favourite Counting Crows album. It could be a generation thing and not only a "Mr. Jones" hit single impact. It's true, that this track brought the band glory and recognition to the stratosphere, but that's not merely it. The whole album is a celebration of refined producing and musicianship. ... We might be accustomed to the CD sound of the album as it was mastered as such, but thank God to Chad's persistence of seeking out the releases with analog session tapes; what we have here is a new true analog jewel recording being pressed." . Beyond highly recommended." Named a Mono & Stereo Strictly Vinyl Analog Award winner..

"I compared this double 45 with the old gold CD from Mobile Fidelity, which was far superior sounding to the original CD and boy did it suck compared to this. If you want to know why CDs are an unacceptable medium for rock music compare for yourself. The idea that CDs are "transparent to the source" is such bullshit I don't know where to start. Wait! Yes I do! Compare this double 45 to any CD version. The CD sounds cloudy with soft indistinct drums and no crack whatsoever to anything that should sound dynamic. ... If you're part of the 'Mr. Jones' generation that came of age to this record, you'll want to invest in this sonically spectacular version expertly mastered by Ryan Smith at Sterling Sound. You may think you've hear this album but until you hear this edition you really haven't. Quality Record Pressings plating and pressing quality remain models of velvety quiet backdrops and explosive sonics." — Music = 8/11; Sound = 10/11 - Michael Fremer, AnalogPlanet.com

Counting Crows' 1993 debut album released for the first time as an LP in the U.S.! Deluxe Gatefold Jacket!

You make think you've heard this album but until you hear this edition you really haven't.

When the prevailing guitar jingle of "Mr. Jones" cascaded over radio in the early '90s, it was a sure sign that the Counting Crows were a musical force to be reckoned with. Their debut album, August and Everything After, burst at the seams with both dominant pop harmonies and rich, hearty ballads, all thanks to lead singer Adam Duritz. The lone guitar work of "Mr. Jones" coupled with the sweet, in-front pull of Duritz's voice kicked off the album in full force. The starkly beautiful and lonely sounding "Round Here" captured the band's honest yet subtle talent for singing ballads, while "Omaha" is lyrically reminiscent of a Springsteen tune.

The fusion of hauntingly smooth vocals with such instruments as the Hammond B-3 organ and the accordion pumped new life into the music scene, and their brisk sound catapulted them into stardom. On "Rain King," the piano takes over as its aloof flair dances behind Duritz with elegant crispness. The slower-paced "Raining in Baltimore" paints a perfectly gray picture and illustrates the band's ease at conveying mood by eliminating the tempo. Most of the songs here engage in overly contagious hooks that won't go away, making for a solid bunch of tunes. Containing the perfect portions of instrumental and vocal conglomeration, the Counting Crows showed off their appealing sound to its full extent with their very first album.

Thus Analogue Productions has reissued August and Everything After as a double LP set to maximize the dynamic range of this recording. This is the first time that the 'Crows multi-platinum smash has been released in the U.S. as an LP. Mastered by Ryan Smith at Sterling Sound."  This is how rock music should sound like and how you should experience it. With full impact and glory of the medium. Do not miss Counting Crows it sets a milestone that sets a bar so high for decades to come. Both musically and production wise.Analog was and still is the preferred medium not only for my late night listening pleasure, but for my critical listening of gear to test and review. This feels like an art. Dead quiet vinyl, clean and clear pressing, with right pace, expertly mastered Mastered by George Marino and Ryan Smith at Sterling Sound. - MonoandStereo Review

Like with best wine, hand rolled chocolates from finest Peru cocoa that you treat yourself once per month or even a year these two releases feels exactly extraordinary. They are not just an audiophile embracing albums, but a true joy for any music lover and analog fan. A clear recommendation and both albums received the Mono & Stereo Strictly Vinyl Analog award. 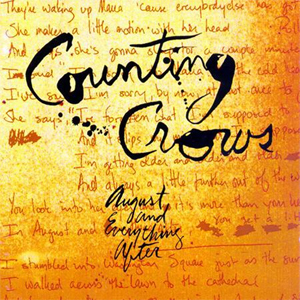