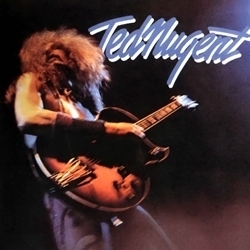 "There was a moment, in 1975 to be exact, when Ted Nugent was taken very seriously. As a musician. Before he decided to become whatever it is that he is now. ... Let’s think back to 1975 when Ted was just a sex–crazed rock star who made a killer self–titled debut solo record that has now been remastered and reissued as a gatefold, by Analogue Productions and Quality Record Pressings. While his songwriting interests have never really changed, these were the best takes on all those ideas that Nugent would from this point on build his career on. ... on Ted Nugent his guitar riffs were never sharper, his playing never less indulgent. This is a record where even the inner cuts like 'Just What the Doctor Ordered' and 'Queen of the Forest' were good to great." — Robert Baird, Stereophile

We feel this is Ted's finest recording by far. And here, you'll hear this classic more clearly and vividly than ever before. This reissue was remastered by Smith in the late George Marino's mixing room at Sterling Sound using Marino's VMS 80 lathe and an ATR 102 tape machine modified by Mike Spitz—the only one of its kind in the world.. Then this 200-gram vinyl beauty was pressed by Quality Record Pressings, makers of the world's finest LPs, where it was plated for vinyl by Gary Salstrom, QRP's master plating technician and general manager. The power burned into these grooves is difficult to find anywhere else this side of the Atlantic, and indeed it remains a rare commodity anywhere in the world.

As Ted himself proclaims: "If anyone wanted to know what rock 'n' roll was all about, this is the only album they'll need."

From the ground breaking Amboy Dukes' hit "Journey to the Center of the Mind," to solo classics like "Stranglehold" and "Cat Scratch Fever," Damn Yankees chartbuster "High Enough," and cult classic "Fred Bear,” Ted Nugent’s no-holds barred career has spanned an uncompromising five rewarding decades.
Ted Nugent's first solo outing followed the end of the Amboy Dukes and months of hardcore touring that had established him as an ax-man to be reckoned with. Many fans regard his 1975 self-titled solo debut, featuring singer/guitarist Derek St. Holmes, bassist Rob Grange and drummer Cliff Davies, as one of the best studio albums of Ted's heralded career.
More than 35 years later, The Nuge still likes to reflect back on what his critics were saying as he put the Amboy Dukes to rest and started the next phase of his career, one that would be under his own direction and, most importantly, under his own name. "I remember some of the more creative writers of the ilk claimed it would be the final nail in my coffin - quote, unquote," Nugent says with a redemptive laugh. "I knew better."

With the release of Ted Nugent in 1975, the self-proclaimed Motor City Madman and god of gonzo guitar became one of rock 'n' roll's icons. With radio playing the hell out of the eight-and-a-half minute opus “Stranglehold” and the “Hey Baby,” Ted Nugent vaulted into the Billboard Top 30, quickly went gold and eventually sold more than two million copies.

He soon became known as the hardest-working and top-grossing gunslinger of the mid- and late-'70s, equaled for excitement only by mighty peers such as Aerosmith and Led Zeppelin. For T-shirted kids who worked hard all day and wanted their rock 'n' roll and pound their eardrums through their skulls, Nugent was, as the song says, "Just What The Doctor Ordered."
Musicians:
Ted Nugent, guitars, vocals, percussion
Derek St. Holmes, rhythm guitar, vocals
Rob Grange, bass
Cliff Davies, drums, vibes, vocals
Ted Nugent Ted Nugent
1. Stranglehold
2. Stormtroopin
3. Hey Baby
4. Just What the Doctor Ordered
5. Snakeskin Cowboys
6. Motor City Madhouse
7. Where Have You Been All My Life
8. You Make Me Feel Right At Home
9. Queen of the Forest 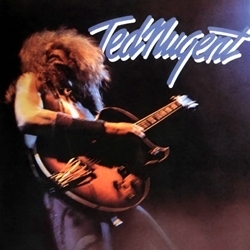