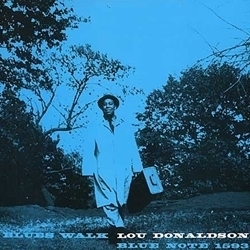 "…As much as I'd love to relay all kinds of anecdotes about the challenges Steve Hoffman and Kevin Gray encounter during the mastering sessions, I witness none. These boys know the sound of the facility and the Van Gelder masters like the backs of their hands…Back home a month later, I unpack some test pressings they sent me…I hear the most realistic-sounding drums ever reproduced by my system. It's as though I'm sitting at the point of creation, experiencing the same high that brought such gifted musicians together as one. Steve Hoffman, Kevin Gray, Chad Kassem, and Don MacInnis have done Rudy Van Gelder and his Blue Note artists proud." – Jason Victor Serinus, Stereophile,

The same formula that made the Fantasy 45 Series perhaps the most successful audiophile reissue collection ever is now being reapplied to Blue Note reissues!

Lou Donaldson's undisputed masterpiece, Blues Walk, marks the point where the altoist began to decisively modify his heavy Charlie Parker influence and add a smoky, bluesy flavor of his own. The material is still firmly in the bebop style, and the mellower moments aren't as sleepy as some of Donaldson's subsequent work, so the album sounds vital and distinctive even as it slows down and loosens things up.l.