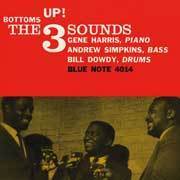 "…As much as I'd love to relay all kinds of anecdotes about the challenges Steve Hoffman and Kevin Gray encounter during the mastering sessions, I witness none. These boys know the sound of the facility and the Van Gelder masters like the backs of their hands…Back home a month later, I unpack some test pressings Chad Kassem has sent me…I hear the most realistic-sounding drums ever reproduced by my system. It's as though I'm sitting at the point of creation, experiencing the same high that brought such gifted musicians together as one. Steve Hoffman, Kevin Gray, Chad Kassem, and Don MacInnis have done Rudy Van Gelder and his Blue Note artists proud." – Jason Victor Serinus, Stereophile,

The same formula that made the Fantasy 45 Series perhaps the most successful audiophile reissue collection ever is now being reapplied to Blue Note reissues!

Best of all, the recording is more than up to the task of letting all that fun and emotion come pouring out into your room. Without a doubt this one is a keeper and if you want a stereo version of it, this is the one to own. By the way it is a beautiful stereo recording, not at all panned too hard to the left and right as many early stereo recordings were.
• Mastered by Kevin Gray & Steve Hoffman at AcousTech
Musicians:
Gene Harris, piano, celeste
Andrew Simpkins, bass
Bill Dowdy, drums
Selections:
1. Besame Mucho
2. Angel Eyes
3. Time After Time
4. Love Walked In
5. I Could Write A Book
6. Jinne Lou
7. Nothing Ever Changes My Love For You
8. Falling In Love With Love