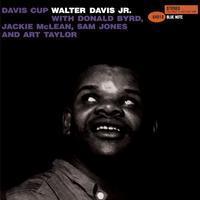 Although a Blue Note regular at the time on sessions by Donald Byrd, Art Blakey and others, Walter Davis made only one album for the label. With Byrd, Jackie McLean, Sam Jones and Art Taylor, he explores six of his finest compositions. Davis possessed the ability to write music that was funky and catchy, but still progressive, which explains why he was one of Art Blakey's favorite pianists and composers. "Minor Mind," "Make It" and "Millie's Delight" are among the album's highlights.

Davis is one of those 1950s stories of the creative guy with chops who was simply lost amid a sea of similar musicians. It's a pity.
Every now and then, I hear a musician in a band and I think, "Damn, can we get rid of the other guys and just hear this one by himself?" That was my immediate thought after listening to Davis Cup, a hard bop cooker from 1959.