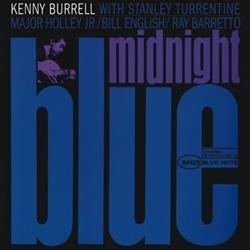 "...if you haven't picked up every one of the Blue Note and Nat King Cole reissues , you're really missing out!" - David W. Robinson, Positive Feedback,

"…Once you get into the swing of the consistently cool grooves you just want to stay there, which makes the four side changes here more painful than on some of the other Blue Note double 45s. No matter, luxuriating in the big, warm, soft yet detailed sound is easily worth the get-up-and-turn-it-over-effort. A highly recommended Blue Note reissue." Music = 9/11; Sound = 9/11 – Michael Fremer

Alfred Lion considered Kenny Burrell's Midnight Blue his favorite production and well he should have. Without piano, Burrell, Stanley Turrentine and company get a clean open sound and a deep groove on such classic compositions as the title tune and "Chitlins Con Carne," which has become a blues band staple.

Kenny Burrell has led over 100 albums in his long career and is the epitome of good taste and melodic swing, never playing a phrase that would be considered out-of-place or unworthy. He first recorded in 1951 with Dizzy Gillespie and was a major part of the Detroit jazz scene before emerging in New York in 1956. Burrell was one of the very first guitarists to be showcased in a pianoless trio, and when he was signed to Blue Note, he became one of the most influential guitarists in jazz. However to hear Burrell at his most soulful and bluesy, one has to find recordings where he is teamed with a particularly inspiring stylist. 1963’s Midnight Blue is considered one of the most exciting recordings of Kenny Burrell’s long career. It was a magical occasion that teamed Burrell with the passionate tenor-saxophonist Stanley Turrentine in a pianoless quintet that also includes Ray Barretto on congas. With Turrentine (who is immediately recognizable within two sounds) infusing each note with an excess of soul and Barretto giving the blues-oriented music a Latin tinge, Burrell raises the heat and is heard at his most exhilarating and extroverted. His soulful playing on such songs as “Chitlins Con Carne,” “Saturday Night Blues” and “Gee Baby Ain’t I Good To You” is so greasy and emotional that it reminds one that both B.B. King and Duke Ellington often cited Kenny Burrell as their favorite guitarist. While Kenny Burrell has recorded scores of albums since this time, Midnight Blue cannot be topped and will always be one of the key recordings that he will be remembered for. This superbly recorded classic needs to be in every jazz collection 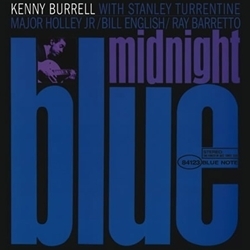