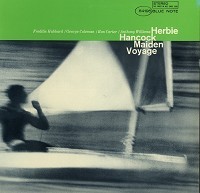 "...The original Van Gelder vinyl mastering of this record is not bad at all. In fact it is quite good - and most anyone would be very happy if it was the only version of this great album in their collection. That is, until they hear this fantastic 45 RPM version from Analogue Productions, which is simply a must-have for anyone who loves the record. Highly Recommended." - My Vinyl Review, December 2010

Exceptional reissue A truly fine reissue from Analogue Productions. The music just breaths with a large soundstage, microdetail and dynamics. This is one of my favorite Blue Note albums and this reissue allows a better view into the session compared to the  original pressing-.5/5 LPreview

Every single tune on this album from the haunting "Maiden Voyage" to the gentle, swinging "Dolphin Dance" has found its way into the standard jazz repertoire. Herbie Hancock fashioned a modern jazz milestone with extraordinary compositions, interplay and solos.

The same formula that made the Fantasy 45 Series perhaps the most successful audiophile reissue collection ever is now being reapplied to Blue Note reissues! Every single tune on this album from the haunting "Maiden Voyage" to the gentle, swinging "Dolphin Dance" has found its way into the standard jazz repertoire. Herbie Hancock fashioned a modern jazz milestone with extraordinary compositions, interplay and solos.

Less overtly adventurous than its predecessor, Empyrean Isles, Maiden Voyage nevertheless finds Herbie Hancock at a creative peak. In fact, it's arguably his finest record of the '60s, reaching a perfect balance between accessible, lyrical jazz and chance-taking hard bop. By this point, the pianist had been with Miles Davis for two years, and it's clear that Miles' subdued yet challenging modal experiments had been fully integrated by Hancock.

Not only that, but through Davis, Hancock became part of the exceptional rhythm section of bassist Ron Carter and drummer Tony Williams, who are both featured on Maiden Voyage, along with trumpeter Freddie Hubbard and tenor saxophonist George Coleman. The quintet plays a selection of five Hancock originals, many of which are simply superb showcases for the group's provocative, unpredictable solos, tonal textures, and harmonies. While the quintet takes risks, the music is lovely and accessible, thanks to Hancock's understated, melodic compositions and the tasteful group interplay. All of the elements blend together to make Maiden Voyage a shimmering, beautiful album that captures Hancock at his finest as a leader, soloist, and composer Musicians: Herbie Hancock, piano Ron Carter, bass George Coleman, tenor saxophone Freddie Hubbard, trumpet Anthony Williams, drums Selections: 1. Maiden Voyage 2. The Eye Of The Hurricane 3. Little One 4. Survival Of The Fittest 5. Dolphin Dance
Originally released in 1965. 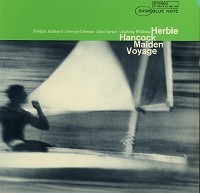