Roy Haynes Quartet - Out Of The Afternoon - 180g LP


can be shipped within OCT 2022 PRE ORDER days 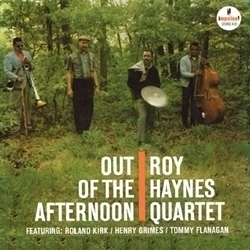 Released in the summer of 1962 on Impulse! Records, Out Of The Afternoon is an album by jazz drummer Roy Haynes. It features multi-instrumentalist Roland Kirk among the musicians in the Haynes Quartet.
Roy Haynes was just about everywhere in the golden age of jazz, recording classic albums with some of the most legendary names of the genre: Miles, Coltrane, Monk, Bud Powell, Sarah Vaughan, Sonny Rollins, Eric Dolphy, Milt Jackson, McCoy Tyner and Jackie McLean. The hard-bop-verging-on-post-bop Out Of The Afternoon is an excellent example of the adventurous spirit that was taking flight in the jazz world in the early 1960s.
How Haynes managed to hook up with Roland Kirk for Out Of The Afternoon is anyone's guess (as far as I can tell they didn't record together elsewhere, and Kirk did not make very many appearances as a sideman), writes The Jazz Record, but in any case when they stepped into the studio in May of 1962 the result was an exciting album that remains criminally under-appreciated despite the outstanding contributions of the all the players present. Tommy Flanagan shines on the piano, his delicate touch the perfect complement to Kirk and Haynes.
"If you're not familiar with Kirk, just check out 'Raoul' and 'Snap Crackle' (both Haynes originals, the second named after a euphemism for his drumming style) where the great jazzman employs his style of playing more than one brass instrument at the same time. On 'Raoul' (which also features an outstanding bowed bass solo by Henry Grimes) Kirk plays the tenor sax and the manzello both simultaneously and individually. On 'Snap Crackle' things get even more interesting. At one point he plays the tenor, the strich, the manzello and the flute at the same time, then follows that with a flute solo that is nothing short of pure Kirk musicianship. He takes the flute out of the bell of his tenor, plays an urgent solo for about six bars before then accompanying the flute with both a nose flute (it is just what it sounds like it is) and then using a humming in his throat as yet another accompanying instrument. Some say Kirk is an acquired taste, I say he's pure genius" — The Jazz Record
Musicians:
Roy Haynes, drums
Roland Kirk, tenor sax, manzello, strich, C flute, nose flute
Tommy Flanagan, piano
Henry Grimes, bass
Side A
1. Moon Ray
2. Fly Me To The Moon (In Other Words)
3. Raoul
Side B
1. Snap Crackle
2. If I Should Lose You
3. Long Wharf
4. Some Other Spring