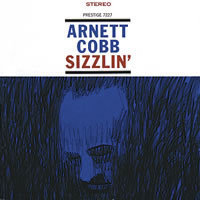 Another of Cobb's great Prestige sessions, this one from late 1960. Cobb and his tenor sax are joined by Red Garland on piano, J.C. Heard on drums and George Tucker on bass. The quartet cruises through six tunes – including two Cobb originals and a couple of old standards in "The Way You Look Tonight" and "Georgia On My Mind."

"A stomping Texas tenor player in the tradition of Illinois Jacquet, Arnett Cobb's accessible playing was between swing and early rhythm blues. After playing in Texas with Chester Boone (1934-1936) and Milt Larkin (1936-1942), Cobb emerged in the big leagues by succeeding Illinois Jacquet with Lionel Hampton's Orchestra (1942-1947). His version of "Flying Home No. 2" became a hit, and he was a very popular soloist with Hampton..." - Scott Yanow, All Music Guide

"...It is now possible to believe that John Coltrane, Bill Evans and Sonny Rollins are in your music room without ingesting psychosomatic substances to enhance your powers of perception...AcousTech definitely got it right!...Do whatever you have to, but make sure that you don't miss these releases...Don't let this fantasy become a missed opportunity." - Dennis Davis, Hi-Fi+