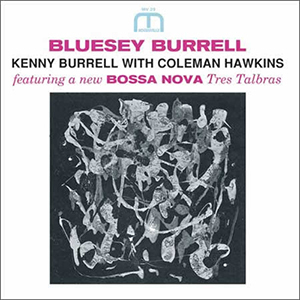 This session is a model of the emotionally intense ballad programs featured on Prestige's Moodsville subsidiary. The great Kenny Burrell receives a major assist from saxophone patriarch Coleman Hawkins (who is in exemplary early-Sixties form), Hawkins's rhythm section of the time (made up exclusively of natives of Burrell's hometown Detroit) and conga drummer Ray Barretto. The choice of material and variety of settings are inspired, with Burrell heard solo on "No More," over just bass and drums on "Guilty," in two different quintet settings and on three titles by the full sextet. Each soloist is fully engaged throughout, with things shifting into even higher gear when Burrell and Hawkins converse on "Montono Blues" and "I Thought About You." With Coleman Hawkins, Tommy Flanagan, Major Holley, Eddie Locke and Ray Barretto.

This session is valuable for the majestic playing of tenor great Coleman Hawkins, who performs on half of the eight tracks. Released on the Prestige subsidiary Moodsville -- a label that specialized in recordings with an intimate, reflective atmosphere -- the Moodsville sound doesn't sit comfortably on Hawkins. His playing is brilliantly relaxed, but it's not mood music. Leader Kenny Burrell's playing is much more in line with the Moodsville groove. The guitarist is not amplified as much as he is on his Prestige dates from this time. In fact, he performs on a nylon-string instrument almost as much as he does on his hollow-body electric. Unlike Hawkins, Burrell's subdued contribution is made to measure for this date. Listeners expecting to hear Burrell the hard bopper won't. The key moments come during the interaction between the guitarist and tenor player, especially during their exchanges on Burrell's "Montono Blues." The rhythm section, Hawkins' working band from this period (pianist Tommy Flanagan, bassist Major Holley, and drummer Eddie Locke) provides impeccable, sublime support

This is the third Prestige album Burrell made with Coleman Hawkins, each with a different mood. The first, SOUL, was a gentle small group session with a nice version of "Greensleeves". The next, the underrated THE HAWK RELAXES, was a graceful ballad set, originally for the Moodsville label. This record was also for Moodsville, but this mood is sad, contemplative, and at times gentle. It's also the last Hawkins session for Prestige. He clearly enjoys playing with Burrell, as much as you'll enjoy playing the record.
Without knowing the production details, this sounds much more organized than a lot of Prestige sessions. The players know each other very well: Tommy Flanagan and Ray Barretto had done many sessions with the leaders, and Eddie Locke and Major Holley were in the Hawkins group at the time. While the group is a sextet, the album boasts five different lineups. Burrell has a solo recording (a slow, pretty, and too short version of "No More") and follows with a guitar-bass-drums number where the two strings blend well. When Barretto takes a breather, we get a Hawkins-Burrell dialogue on "I Thought About You" which I consider the highlight of the album. Bean is more aggressive here than on THE HAWK RELAXES, and his bite brings a lot of strength to this date. Then he sits down, and it's Burrell and Barretto for "Out of This World" , which driftssoftand sad with great interplay from drums and conga. Barretto also gets a solo, his only one here. These numbers alone show many moods and many tempos, with only a few of the pretty ballads expected from this label. It's already worthy of your ears - and then you hear the tracks with the full band.

The sextet appears three times, and all are keepers. "Tres Palabras", the opener, starts slow and develops slower. Flanagan and Barretto start a pattern which is gradually built by Burrell (a gentle, almost Brazilian solo), Flanagan (a single-note pattern based on his comping figures) and lastly Hawkins, pushing forward with a slow power, an understated authority. When he comes in, all is ready, and the others chug behind him, giving Bean a space to work his magic. Needless to say, he does. "Montono Blues" is forceful, led by a tough Burrell rhythm part and a fun bowed bass by Holley, singing along a la Slam. "It's Getting Dark" is another blues, this one slower and more relaxed.

It's definitely a variety album, with many tunes to choose from. Burrell is the star (his high ringing tone also plays octaves here and there), but everyone has their time in the spotlight, especially Hawkins, having a grand time on his last session for Prestige. An added plus is the liner notes, which give us two insights. First, that it was raining when the record was made. You can hear the rain in the mood here, especially on "Tres Palabras" and "Out of This World". The second is a quote Burrell made at the session: "C'mon Bean, let's play something pretty." They did. 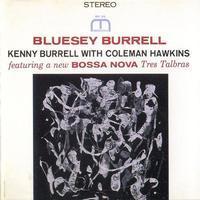