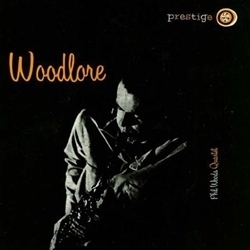 Jazz musician Phil Woods' musical education includes studying with Harvey LaRose in Springfield, Massachusetts, with Lennie Tristano in New York City, one semester at Manhattan School of Music in 1948, then on to Juilliard Conservatory from 1948-1952.

Originally released in 1955, Woodlore finds alto saxophonist Phil Woods carrying the load as the lone horn for the first time in his career while leading a quartet that also includes John Williams (piano), Teddy Kotick (bass) and Nick Stabulas (drums).

The 6-song set features a swift, minor-key version of “Get Happy” and the intense blues number “Strollin’ with Pam” alongside swinging standards like "Slow Boat to China," "Be My Love" and "Woodlore."

Alto saxophonist Phil Woods had recorded with Jimmy Raney and with his own quintet featuring trumpeter Jon Eardley but this was the first date where he was carrying the load as the lone horn, and also his first strictly-for-12-inch LP.

Considering this date was done in November 1955, more than 45 years ago, it holds up exceedingly well. Phil always had all the musical tools. He has continued to develop as an artist but was already very accomplished. The swift, minor-key version of “Get Happy” and the intense blues-saying of “Strollin’ with Pam” are two particularly outstanding examples. Woods also swings hard on three standards, "Slow Boat to China," "Be My Love," and "Woodlore." Pianist Johnny Williams was a Bud Powell disciple who, like a lot of other young pianists, had latched on to Horace Silver. His way of accompanying reflected this in its funky, rolling quality. 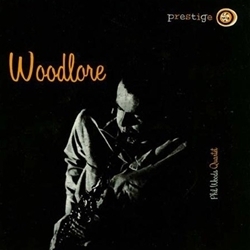