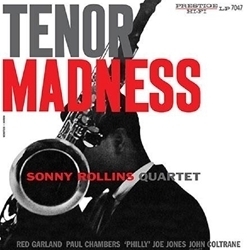 1956's Tenor Madness was officially the recording that established Sonny Rollins as one of jazz's elite tenor saxophonists and it stands alongside Saxophone Collossus as one of his masterworks. The fact that he enlists the talents of Miles Davis'then rhythm section of Red Garland (piano), Paul Chambers (bass) and Philly Joe Jones for the date certainly doesn't hurt matters either. John Coltrane, who was also in Davis' group at the time, is notably featured here on the legendary title track, his only recording with Rollins.
Tenor Madness was the recording that, once and for all, established Rollins as one of the premier tenor saxophonists, an accolade that in retrospect, has continued through six full decades and gives an indication why as a young player, Rollins was so well liked, as his fluency, whimsical nature, and solid construct of melodies and solos gave him the title of the next Coleman Hawkins or Lester Young of mainstream jazz.  Tenor Madness, using Miles Davis’ group – pianist Red Garland, bassist Paul Chambers, and drummer Philly Joe Jones, is the only recording of Rollins with John Coltrane, who was also in Davis’ group.  Rollins and John Coltrane met in 1956 and went on to largely define the state of jazz tenor saxophone in the mid-Fifties. Their playing set a standard that has been a benchmark of excellence for saxophonists—and others—ever since. By the time this LP was released, Rollins already had such albums to his name as Worktime and Sonny Rollins Plus 4 in addition to his sideman exploits with the Clifford Brown/Max Roach Quintet.  As well as the celebrated title track, Tenor Madness includes an intriguing original, "Paul’s Pal," and the mining of unusual material such as "My Reverie," and "The Most Beautiful Girl in the World."  Originally released in 1956. "Coltrane's fearlessness is front and center as he takes the first solo, firing flurries and fusillades from the high end of his tenor sax. He is definitely on his game for the time. He's a willing teammate as he trades fours with Rollins on an ending dialogue where the two players happily finish each other's thoughts... Rollins shows his romantic-ballad side on 'When Your Lover Has Gone' and 'My Reverie', gets playful on 'Paul's Pal' (his tribute to bassist Paul Chambers), and upends Rodgers and Hart's 'The Most Beautiful Girl In The World' when he switches mid-stream from a waltz to a fast 4/4... It's a given that John Coltrane was a miraculous player; his cameo here shows how far he went to become that way." - J. Hunter, All About Jazz
Musicians:
- Sonny Rollins (tenor saxophone)
- John Coltrane (tenor saxophone)
- Red Garland (piano)
- Paul Chambers (bass)
- Philly Joe Jones (drums)
Sonny Rollins Tenor Madness

1. My Reverie
2. Paul's Pal
3. The Most Beautiful Girl In the World
4. When Your Lover Has Gone
5. Tenor Madness 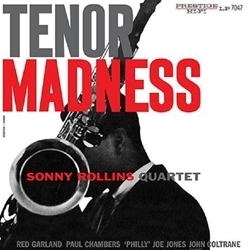