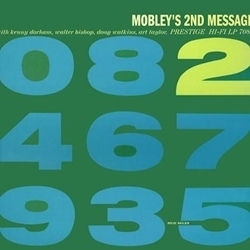 Hank Mobley’s 1957 Prestige Records LP Mobley’s 2nd Message is a phenomenal hard bop jazz album of the ’50’s era. Utilizing Doug Watkins on bass, drummer Art Taylor, pianist Walter Bishop and trumpeter Kenny Dorham, Hank Mobley and his band are in top form. It’s incredible to think that this entire album was recorded in one day, a standard of the jazz era that came before the electric era.

Hank Mobley was an American hard bop and soul jazz tenor saxophonist and composer. Mobley was described by Leonard Feather as the "middleweight champion of the tenor saxophone," a metaphor used to describe his tone, that was neither as aggressive as John Coltrane nor as mellow as Stan Getz, and his style that was laid-back, subtle and melodic, especially in contrast with players like Sonny Rollins and Coltrane. The critic Stacia Proefrock claimed he is "one of the most underrated musicians of the bop era."

Spirited solo’s are laced around precision based harmonies and a never ending sense of soul and intellectualism. 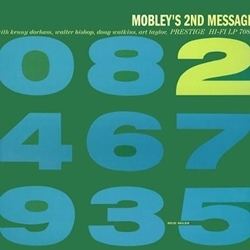