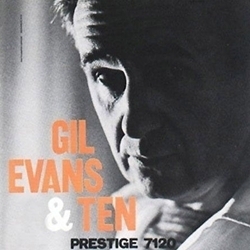 Evans displaying his keyboard prowess framed against inventive brass and woodwind orchestrations that expertly mix the textures of the various horns present—trumpets and bassoon—what a sound! The sonics of this pressing are warm and rich and absolutely breathtaking! As is customary with Analogue Productions reissues, the mastering and cutting duties for this release were handled by Kevin Gray. The records were plated by Gary Salstrom and pressed at the Quality Record Pressings plant in Salina, KS. This is a deep groove pressing with a high-quality thick cardboard tip-on jacket from Stoughton Printing that adds a classy feel to this sparkling reissue that captures the work of a genius just then finding his signature sound. - www.stereophile.com

"I was so pleased with the job Analogue Productions did with their reissue of Out of the Cool, Evans's 1960 Impulse! album, that I immediately ordered their vinyl edition of Gil Evans & Ten when it became available. This is the recording's first release on vinyl in stereo ... The new LP more sharply presents Steve Lacy's soprano sax in Cole Porter's "Just One of Those Things," and the instrument plays better against Evans's percussive piano lines. I could hear the band easing in behind Evans in the early moments of the track, and it sounded more dynamic as the arrangement built. Evans's high notes about two-thirds of the way through sound fuller, rounder toned, and more emphatic on the Analogue Productions LP. ... this new pressing reveals more depth and warmth in the sound, and lets me feel as if I'm closer to the band, and able to hear more of what's going on in the music." Musical Performance = 4 1/2 Stars; Sound Quality = 4 1/2 Stars; Overall Enjoyment = 4 1/2 Stars — Joseph Taylor, SoundStageUltra.com

Remastered by Kevin Gray and impeccably pressed at QRP, the sound is excellent. Tonally rich and warm, but not overly fat or golden, with an airy and expansive soundstage in which the main instruments occupy the front section, layering back to the supporting players, with the drums and bass (mostly) at rear. The horns, especially, are creamy-lush, drums have plenty of snap, and there’s a terrific sense of balance and completeness to the whole. - TAS - The Absolute Sound

Fresh off the success of Birth of the Cool with Miles Davis, jazz luminary Gil Evans was afforded the opportunity to record his first record as leader with Prestige in 1957. Enlisting the talents of an atypical 11-piece band, which in addition to Evans himself on piano, also included such soloists as trombonist Jimmy Cleveland and saxophonists Steve Lacy and Lee Konitz, the diverse outing is extremely inventive in its use of harmonic voicings and dynamics, reflected brilliantly in the diverse material which ranges from Leadbelly to Leonard Bernstein to Cole Porter and even an Evans original.

In 1957, Miles Davis, high on the success of his recent collaborations with his old friend Gil Evans, persuaded Prestige Records to give Evans his own record date. Evans packed the resulting album with the brilliance that music insiders had recognized since his days as an arranger for Claude Thornhill in the 1940s and his work on Davis' Birth of the Cool recordings. Writing for only 11 instruments, Evans used his wizardry with dynamics, motion and harmonic voicings to create orchestral effects suggesting a substantially larger orchestra. His settings stimulated his musicians to inspired improvisation. Among the soloists are trombonist Jimmy Cleveland, saxophonists Steve Lacy and Lee Konitz, and Evans himself, making his first recorded appearance as a pianist.

Although arranger Gil Evans had been active in the major leagues of jazz ever since the mid-'40s and had participated in Miles Davis' famous Birth of the Cool recordings, Gil Evans & Ten was his first opportunity to record as a leader. The set features a typically unusual 11-piece unit consisting of two trumpets, trombonist Jimmy Cleveland, Bart Varsalona on bass trombone, French horn player Willie Ruff, Steve Lacy on soprano, altoist Lee Konitz, Dave Kurtzer on bassoon, bassist Paul Chambers, and either Nick Stabulas or Jo Jones on drums, plus the leader's sparse piano. As good an introduction to his work as any, this program includes diverse works ranging from Leadbelly to Leonard Bernstein, plus Evans' own "Jambangle." The arranger's inventive use of the voices of his rather unique sidemen make this a memorable set. 5/5 Allmusic

All titles will be mastered from the original analog master tapes by Kevin Gray.  The 200g LPs will be cut at 33rpm at the  state-of-the-art pressing plant, Quality Record Pressings, plated by Gary Salstrom. 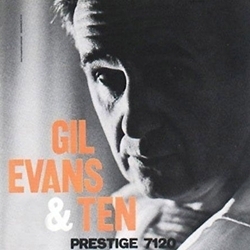