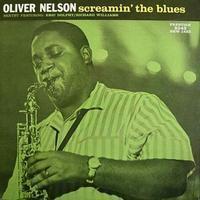 Posterity remembers Oliver Nelson (1932-1975) primarily as an arranger/conductor. When he first began to attract attention with a series of albums for Prestige and its subsidiaries, however, Nelson was hailed as a versatile leader of small groups and a composer/instrumentalist who could refresh the music's traditional verities while also looking ahead. There is no better showcase for these skills among his initial sessions than Screamin' the Blues, a rousing set of funky modernism interpreted by a sextet of players who shared Nelson's allegiance to both virtuosity and vision. The pairing of saxophonist Eric Dolphy with Nelson was particularly inspired as both men were adept on more than one instrument, and allowed this sextet to create an uncommon diversity of colors. Nelson and Dolphy would reunite a year later on both the classic Blues and the Abstract Truth and (with the band heard here minus trumpeter Richard Williams) on the looser yet intense Straight Ahead. With Richard Williams, Eric Dolphy, Richard Wyands, George Duvivier and Roy Haynes.

Screamin' the Blues is an apt description of the soloists' approach on this 1960 session, here reissued as an RVG remaster, the first of three matching leader Oliver Nelson with avant-gardist Eric Dolphy. Although not as well-known as Nelson's masterpiece, Blues and the Abstract Truth (1961), the date is characterized, above all, by "generosity" on the part of all three principals, including the underrated trumpeter Richard Williams.
Nelson's tenor solo on the title tune is the equivalent of an operatic tenor aria—full-throated, dramatic, played to the back row. It alone is testimony to the remarkable player he was before putting the horn aside and arranging for everyone from Ringo Starr to Thelonious Monk to opera diva Rise Stevens. Add to these activities his film scores for Last Tango in Paris, Lady Sings the Blues, and Alfie, with a sound-track featuring Sonny Rollins, and you begin to wonder less at why he died so young than how he accomplished so much in his forty-three years.

On both tenor and alto Nelson favored a pure but powerful sound. His vibrato spins tightly and he's forward on the beat, but otherwise the decisiveness and absolute assurance with which he "sticks" every note is prime-time Dexter Gordon. Moreover, he thinks like a composer—constructing solos with a beginning, middle, and end, each musical narrative culminating in a majestic but hard-earned climax. As harmonically grounded as he is, no player is more averse to "running the changes"; in fact, Nelson incorporates the principle of tension and release practically to the extreme. He will repeat an identical phrase derived from a chord's "extension notes" to the point of discomfort before relinquishing it to the harmonic mainstream. Especially striking examples are his solos on "Perdido (Soul Battle, 1960) and "Mainstem (Mainstem, 1961).

Following the stentorian statements of Nelson's tenor and Williams' trumpet on the title tune, Dolphy's squawking bass clarinet sounds like an odd duck. But once moving to alto for "March On, March On" he reveals the aggressive technique and bold harmonies that caused Nelson, a harmonic experimenter and virtuoso player in his own right, to see in Dolphy an adventurous musical soul and kindred spirit, someone capable of pushing the leader to greater risks and potentially greater rewards.

Dolphy remains on alto for the next five tunes, frequently raising the bar for Nelson, whose musical-emotional rhetoric, fueled by Dolphy's range-busting top tones and volcanic technique, is not about to give an inch. After a particularly blistering solo by the guest alto player on the leader's "Alto-itis," Nelson starts his solo tenuously, as though planning his attack carefully before executing with breathtaking surgical precision, leaving the "screamin'" to the entire ensemble on the out chorus. Sounding no less eruptive than the Count Basie band—from the Wyands-Duvivier-Haynes power plant to the three explosive horns each impersonating an entire section—it's a fitting finale by musicians for whom feeling blue is an occasion for celebrating. 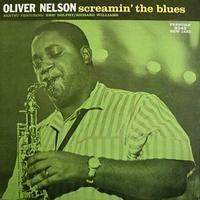