can be shipped within JULY 2022 PRE ORDER days 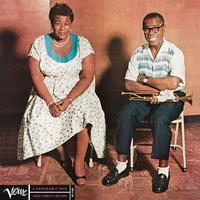 Acoustic Sounds Series reissues from Verve/Universal Music Enterprises!
Monthly releases highlighting the world's most historic and best jazz records!
Mastered by Ryan K. Smith at Sterling Sound from the original analog tapes
"The classic jazz album that brought Ella Fitzgerald and Louis Armstrong together for the first time as they recorded their version of extraordinary standards." — Wax Time
The evening before Louis Armstrong recorded this album, both he and Miss Fitzgerald were appearing in an all-star concert also featuring Art Tatum and Oscar Peterson that was recorded for an album titled Live At The Hollywood Bowl (1956). The following day the two singers, along with the Oscar Peterson Trio, were in a Los Angeles studio to record this gem of an album.
With no time for rehearsals the songs were all set in Louis' key to make it easier, but this in no way inhibits Ella's performance. Another challenge for Pops was the fact that the material was not his normal repertoire, meaning he had to learn things on the fly in the studio. Again there's no hint of any issues, which all goes to highlight Armstrong's innate musical ability.
Side A
1. Can't We Be Friends
2. Isn't This A Lovely Day?
3. Moonlight In Vermont
4. They Can't Take That Away From Me
5. Under A Blanket Of Blue
6. Tenderly
Side B
1. A Foggy Day
2. Stars Fell On Alabama
3. Cheek To Cheek
4. The Nearness Of You
5. April In Paris