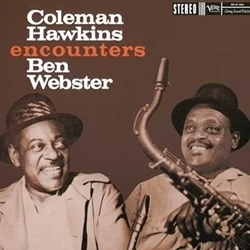 "...these are all truly classic Verve titles that you simply don't want to miss...most importantly, the sound of these reissues is nothing short of astounding. Particularly the early Billie and Ella mono records are incredible treasures of sonic beauty. I'd definitely ask Santa for the whole set, or, if you want to cherry pick, the most classic titles. Whatever you decide, you owe yourself at least a half dozen!"

Some of today's saxophonists come close, but none have either the Hawkins/Webster fullness of tone or the enveloping spirit that sounds a strikingly individual identity. That's also called soul. When it came to music, neither Hawkins nor Webster would compromise.

"Coleman Hawkins Encounters Ben Webster" is a studio album recorded on October 16, 1957, by Coleman Hawkins and Ben Webster, accompanied by a rhythm section led by Oscar Peterson. In the United Kingdom, the album was released with the title "Blue Saxophones".

One of the great studio sessions of the 1950's (and part of a series by producer Norman Granz to pair pianist Oscar Peterson’s trio with great horn players), "Coleman Hawkins Encounters Ben Webster" remains a jazz masterpiece. Musicians back then would often show up and call tunes instead of bringing original compositions to recording sessions. The concept may have been simple, but the performances by Hawkins and Webster, two of the greatest tenor saxophone players in jazz, are incredibly deep. The renditions of certain jazz standards on this classic album some of the most beautiful versions ever put on record. 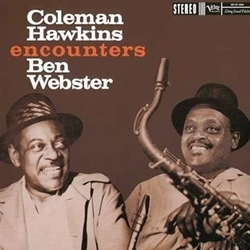