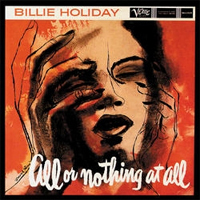 "...the third (Billie Holiday album) to receive the two-disc 45 RPM treatment by Analogue Productions. ... Billie sounds like she's at the microphone in your living room. The instruments are spread out between the speakers and there is plenty of depth. A pristine original has a bit more pronounced vocal sibilance and air, and this reissue smooths that out a bit. That aside, this is a fabulous reissue of essential music. Highest recommendation." — Recording = 9.5/10; Music = 10/10 — Dennis D. Davis, Hi-Fi +

Nicknamed Lady Day by her friend and musical partner Lester Young, Holiday was a seminal influence on jazz and pop singing. Her vocal style, strongly inspired by jazz instrumentalists, pioneered a new way of manipulating phrasing and tempo.

"...these are all truly classic Verve titles that you simply don't want to miss...most importantly, the sound of these reissues is nothing short of astounding. Particularly the early Billie and Ella mono records are incredible treasures of sonic beauty. I'd definitely ask Santa for the whole set, or, if you want to cherry pick, the most classic titles. Whatever you decide, you owe yourself at least a half dozen!" Winner of a 2012 Positive Feedback Online Writers' Choice Award - Danny Kaey, Positive Feedback Online, November/December 2011

After the publication of her autobiography, Lady Sings The Blues, Billie Holiday was doing good business in clubs in what turned out to be a last burst of stardom. We cannot know why she stopped recording for Norman Granz after January 1957 - but the present collection is a magnificent culmination of her years with the producer.

Holiday’s death in July 1959, but at that time, Granz still had unreleased material from these Verve sessions, and so the original LP of “All or Nothing At All”, issued a few months after Holiday’s passing, actually served as an appropriate epitaph for Billie Holiday, capturing one of the last times that her voice and spirit were united in perfect synchronization.

I’d rather hear [Billie Holiday] now. She`s become more mature. Sometimes you can sing words every night for five years, and all of a sudden it dawns on you what the song means…. So with Billie, you know she’s not thinking now what she was in 1937, and she’s probably learned more about different things. And she still has control, probably more control now than she did back then. No, I don’t think she’s in decline."—MILES DAVIS, 1958. 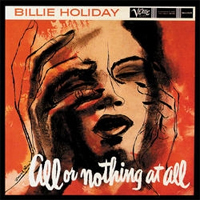 * Prices include VAT, plus delivery
Browse these categories as well: JAZZ, Home page
Contact information
Billie Holiday - All Or Nothing At All - 45rpm 200g 2LP Mono - SCOTT NANGLE AUDIO
T&C's and Privacy Policy