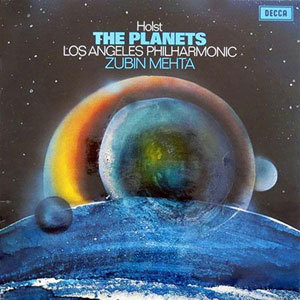 Zubin Mehta’s sensational interpretation of The Planets is probably the most famous (among audiophiles) of his excellent series of recordings with the Los Angeles Philharmonic Orchestra. The performance itself is probably as good as any, and the sound, highlighted by a powerful, warm, and deep organ, is magnificent. The pedal effects at the end of “Saturn” are stunning. Mehta has made a specialty out of Mahler’s Third Symphony. The massive first movement, with its outstanding inner detail of the lower registers of the orchestra, may be the best ever recorded, especially if you are primarily considering the sound. I was initially captivated by the sound of the sublime final movement, but Mehta’s insistence on accelerating the tempo at the climaxes detracts from the performance as a whole. The timpani at the end and the final sumptuous chord have never sounded so good on a recording.- The Absolute Sound

This is a fantastic listening experience. If you are a fan of Holst: The Planets and have an SACD player, buy this now! 5/5 SACDrview

We've remastered these historic recordings from the original master tapes and the digital transfers were made by renowned European mastering engineer Willem Makee.

Early London/Decca Stereo Classical instrumental and chamber music recordings (1956-1963) contain some of the premient historical musical performances, many of which remain unequalled today. These reissued titles are very sought-after titles by collectors, never before available in a high-resolution digital format! The SACDs have been authored for us by Gus Skinas of the Super Audio Center in Boulder, Colorado.

These are designed to be the finest editions of these recordings ever reissued.

Earth was not created in a day. And the same applies to Gustav Holst's interplanetary symphony which took him about three years to write. The composer employs a massive orchestra and rich orchestral coloring to portray each planet in his musical psychogram. Mars, the Bringer of War, rages with mechanical brutality, while Venus brings peace and an acceptance of life. Mercury, the Winged Messenger, darts here and there with quicksilver speed, while powerful and sovereign Jupiter brings jollity and reassurance. Saturn plods by with heavy tread, while Uranus with its contrasting changes in tempo remains enigmatic and extrovert. And because Pluto, the most distant planet had not yet been discovered, it is Neptune, the great unknown, which is lost in time and space in an endless ostinato of female voices. Zubin Mehta and the Los Angeles Philharmonic present this astronomical journey with precision and exhilaration, leaving neither time nor space for astrological speculation. As always, the excellent Decca recording quality guarantees an unimpeded view of this musical galaxy.

This Hybrid SACD contains a 'Red Book' Stereo CD Layer which is playable on most conventional CD Players! 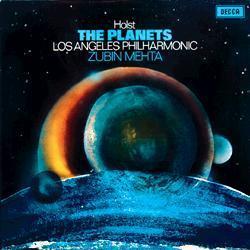