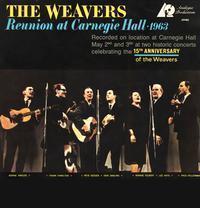 HiFi News ALBUM CHOICE  "At a time when political misfits are enjoying dangerous crediblity in positions of real power, it's hard to be blasé while reviewing works by nihilists, anarchists or other so-called rebels. Thus it is through gritted teeth I force myself, in the role of audio critic, to subsume my abhorrence of naive 'Kumbaya' warblers and recognize the genuine sonic excellence of this perennial audiophile favorite. Still, I love knowing that this cliché'd, right-on, PC fare — 'Wimoweh,' 'If I Had A Hammer,' 'Study War No More,' et al — will be played without irony through systems that cost more than the annual national wage. Decades before 'unplugged' became a commercial proposition, this was the genuine acoustic standard." — Sound Quality = 93% — Ken Kessler, HiFi News, January 2016

Mastered by Kevin Gray from the original 3-track tape

Recorded on location at Carnegie Hall on May 2-3, 1963 at two historic concerts celebrating the 15th anniversary of folk legends
The Weavers featuring Bernie Krause, Frank Hamilton, Pete Seeger, Erik Darling, Ronnie Gilbert, Lee Haysand Fred Hellerman.
The Weavers are, some profess, the greatest folk group of the past century. They fostered the folk boom of the late 1950s and early 1960s, yet as All Music Guide notes, others scored with their songs, notably Peter, Paul and Mary, who took the group's early song "If I Had a Hammer" into the Top 10.
The group reclaimed that song and others, such as "Wimoweh" (which was pilfered by the Tokens as "The Lion Sleeps Tonight"), and at their reunion performed their own old hits such as "Goodnight Irene." Numerous lead singers make the concert sound more like a folk festival than a group performance, but this record remains a very spirited and passionate affair.

his is a real classic, both musically and sonically.

This Hybrid SACD plays in both CD and SACD players, as well as all SACD-compatible DVD players.