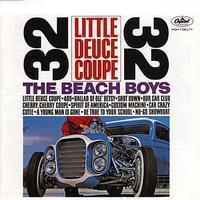 "...this is still "formation period" Beach Boys, when the music was simple and derivative ... But there are two moments on this otherwise lightweight set that lift it above the surf/car mire. One is the lively homage to student days, 'Be True To Your School,' and the other is the stunning, jaunty title track. When any ode to a car proclaims, "I get rubber in all four gears,' you know you're hearing modern poetry. The sound, though probably immaterial for this opus, is spectacular." — Sound Quality = 86% - Ken Kessler, HiFi News,
Original mono mix produced by Brian Wilson
Original stereo mixes created in 1963 under Brian Wilson's supervision
The ultimate pressings of the Beach Boys discography from Analogue Productions
Mono mixes created under Brian Wilson's supervision
Audio production — Mark Linett - For Brother Records — Elliott Lott
Mastered by Kevin Gray at Cohearent Audio, most from the original master tapes or best sources available
Hybrid Stereo/Mono SACD plays in both CD and SACD players, as well as all SACD-compatible DVD players
"These are the best sounding and best-looking versions of the Beach Boys records that have ever been produced. We want everything about these to be better than the original."
A musical legacy that began in Hawthorne, California and went on to conquer the world. Analogue Productions presents the ultimate pressings of 14 essential Beach Boys albums! Mastered by Kevin Gray, most from the original master tapes, now presented on Hybrid Stereo/Mono SACD, these are awesome recordings to experience.
For the early part of the Beach Boys career, all of their singles were mixed and mastered and released only in the mono format. Hits were made on AM radio in mono. And the mono of those times worked well for Brian Wilson — famed co-founder, songwriter and arranger — who suffers from partial deafness. The mono mixes were where Wilson paid intense attention, and the dedication paid off!
We’ve taken 10 of the most classic, best-sounding Beach Boy titles ever and restored them to their mono glory!
Still, there’s no disputing that the close harmonies and one-of-a-kind rhythms of hits like “Surfer Girl,” “In My Room,” “Little Deuce Coupe” and more lend themselves naturally to stereo. So we’ve got your 2-channel needs covered with prime stereo mix versions as well.
The stereo editions of Surfin' USA, Surfer Girl, Little Deuce Coupe, Shut Down Vol. 2, All Summer Long, Beach Boys Christmas Album and Beach Boys Concert were all mixed in stereo by their own preferred engineer, Chuck Britz, ostensibly under the group's supervision.
"Brian may or may not have been present for those mixing sessions — evidence suggests that he trusted Chuck's skills enough to let him prepare those mixes on his own - but the group held onto their multitrack tapes and delivered stereo masters to Capitol, rather than allowing Capitol to prepare their own stereo versions. Later, when Brian was only delivering mono masters, Capitol would prepare the Duophonic pseudo stereo editions for the stereo market," says Alan Boyd, producer and Beach Boys' archivist.
The Beach Boys' practice of double-tracking their vocals really lends itself to stereo mixes. Split left and right, as they are on a lot of those early stereo versions, those doubled vocal parts can really envelop the listener, surrounding them with Wilsons, Loves and Jardines!
All of the newer stereo mixes on these remastered albums (The Beach Boys Today!, Summer Days (And Summer Nights!!), The Beach Boys' Party, Pet Sounds and Smiley Smile) were all done by Mark Linett on behalf of the Beach Boys.
Released just one month after the Surfer Girl album, Little Deuce Coupe was, incredibly, the Beach Boys' fourth album in less than a year. Brian Wilson and the band responded by turning in arguably their most consistent effort to date — and a concept album, to boot.
Little Deuce Coupe expanded the band's subject matter to encompass 1963 America's burgeoning love affair with hot rods, surrounding previously released cuts such as the title track, '"409," and others with strong new material (much of it cowritten by Wilson and a DJ, Roger Christian). A highpoint: the a cappella James Dean tribute "A Young Man Is Gone" (a reworking of Bobby Troup's beautiful "Their Hearts Were Full of Spring"), a prime example of Wilson's arranging genius and the band's vocal prowess. "Their Hearts Were Full Of Spring" had been a standard for the vocal group The Four Freshmen, whose lush and distinctive jazz-based vocal arrangements had a huge influence on Brian's musical development
Tracklist
Stereo
1    Little Deuce Coupe
2    Ballad Of Ole' Betsy
3    Be True To Your School
4    Car Crazy Cutie
5    Cherry, Cherry Coupe
6    409
7    Shut Down
8    Spirit Of America
9    Our Car Club
10    No-Go Showboat
11    A Young Man Is Gone
12    Custom Machine
Mono
13    Little Deuce Coupe
14    Ballad Of Ole' Betsy
15    Be True To Your School
16    Car Crazy Cutie
17    Cherry, Cherry Coupe
18    409
19    Shut Down
20    Spirit Of America
21    Our Car Club
22    No-Go Showboat
23    A Young Man Is Gone
24    Custom Machine