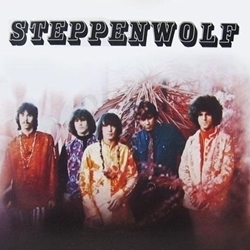 Although familiar to anyone who was sentient in the '60s, or who has a retro fetish that includes repeated viewings of "Easy Rider," this masterful reissue reveals just how good Steppenwolf's 1969 debut sounds. Audiophiles are aware that Dunhill Records — home of The Mamas and The Papas — could deliver sonic masterpieces, but who knew that this early example of 'hard' rock was so well-treated in the studio? I have never heard 'Born To Be Wild' sounding so visceral, the biggest shockers being the sense of space during the drum break at 2m 07s and the fluidity of the bass. The guitar opener on "Your Wall's Too High" is also a revelation. It's on vinyl too, if you find digitizing this gem to be sacrilegious." Sound quality 90%. Ken Kessler, Hi-Fi News.

Steppenwolf's self-titled 1968 debut album, recorded in a mere four days, introduced the band's iconoclastic approach, which combined a tough, blues-rooted sound, a penchant for topical lyrics and the gritty growl of John Kay, whose brooding presence and trademark shades made him one of the era's most magnetic and identifiable figures. Steppenwolf soon emerged as one of the few bands of the late '60s to successfully straddle the pop-oriented AM mainstream and the hip FM underground, scoring substantial success on both the single and album charts without tailoring its approach to pander to either constituency. "Born to Be Wild," written by ex-Sparrow member Dennis Edmonton, aka Mars Bonfire, becameSteppenwolf's first major hit, and was subsequently featured prominently (along with the band's pointed reading of Hoyt Axton's anti-hard-drug composition "The Pusher") in the seminal '60s film Easy Rider, cementing Steppenwolf's status as counterculture icons as well as earning the group a hardcore biker following. "Steppenwolf was first recorded at United/Western Studio's in Los Angeles. We didn't care for the results at all. Through my friend Morgan Cavett, we discovered The American Recording Studio, with engineers Richard Podolor and Bill Cooper. Everything fit together. They, along with Gabriel Mekler our producer made for some very exciting recording sessions. We were knocked out by what we heard. It was everything we hoped for. We recorded onto an eight track machine through a tube board using a live echo chamber that Richie and Bill had built, which was one of the best live chambers in Los Angeles at that time. We recorded seven songs the first day and four more the next. The majority of the vocals were recorded on the third day and the album was mixed on day four. The entire album cost around $9,000.00 to make. We thought it sounded pretty damn good and in my opinion it still holds up to this day. Someone once said, "You have your entire life to get ready for the first album, and no time for the next one." That was certainly true in our case." - John Kay - Hybrid SACD - Compatible with both CD and SACD players Bass Guitar- Rushton Moreve Drums, Percussion, Backing Vocals - Jerry Edmonton Guitar, Backing Vocals - Michael Monarch Guitar, Harmonica, Lead Vocals - John Kay Organ, Piano, Electric Piano - Goldy McJohn 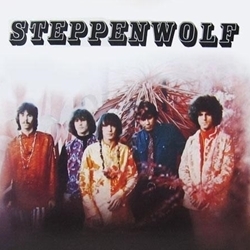