Pink Floyd - Dark Side Of The Moon - SACD 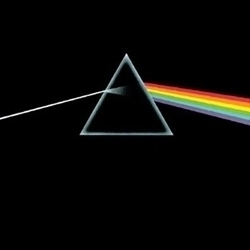 This is Pink Floyd at its collective finest, with everyone contributing. David Gilmour took a huge chunk of the music — writing, laying down the chord progressions on "Breathe," "Time," and "Any Colour You Like," plus the singing on the album's best songs, Water conceeding to David's far superior voice. Gilmour also pumped out what would later be hailed as some of rock's most influential lead-guitar riffs on "Money" and "Brain Damage."

The Dark Side of the Moon produced two singles: "Money" and "Us and Them." The album topped the Billboard chart for a week, and remained on the chart for 741 weeks from 1973 to 1988. Following a change in how Billboard counts sales in 2009, it re-entered the chart and has since appeared for over 900 weeks. With estimated sales of more than 45 million, it is Pink Floyd's bestselling album and one of the bestselling worldwide.
1. Speak To Me
2. Breathe (In The Air)
3. On The Run
4. Time
5. The Great Gig In The Sky
6. Money
7. Us And Them
8. Any Colour You Like
9. Brain Damage
10. Eclipse