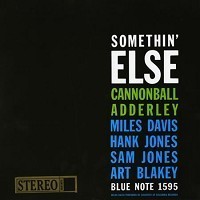 The sound is vintage Rudy Van Gelder, remastered by Steve Hoffman and Kevin Gray from the original master tape. RVG had cut back on the intrusive reverb that dominates the mix on the 1956 Miles Davis Quintet marathon sessions—though he still overused it on John Coltrane: Blue Train. Trumpet and alto are hard left, drums and bass hard right, piano—always a challenge for RVG—generally in the center and set back. The previous version of "Somethin' Else" in my collection was a Liberty Blue Note LP from the early 1970s that was just horrible-sounding. This AP SACD has all the expected virtues of improved clarity and high and low extension within the limits of the era, more dimensionality and detail. Cannonball's alto sounds like it's six feet away, and Miles can be heard sighing through his horn.  Isn't that why we're listening? - Sound 5/5 HRaudio

"...if you haven't picked up every one of the Blue Note and Nat King Cole reissues from Analogue Productions , you're really missing out!" - David W. Robinson, Positive Feedback,  When Cannonball Adderley scheduled the 1958 session for what was to become his only Blue Note release, he called on his old employer Miles Davis from their quintet days on Columbia. The reunion resulted in one of the greatest and most revered jazz albums ever cut.

The chemistry among Adderley, Davis, Hank Jones, Sam Jones and Art Blakey is extraordinary and their reworkings of "Autumn Leaves" and "Love For Sale" are masterpieces. Miles' title tune and Nat Adderley's "One For Daddy-O" are absolute classics.

One of the best known record dates in the history of modern jazz, the chemistry among Adderley, Miles Davis, Hank Jones, Sam Jones and Art Blakey is amazing. Their reworkings of "Autumn Leaves" and "Love For Sale" are masterpieces. Miles' title tune and Nat Adderley's "One For Daddy-O" are classics.

It is an understatement to say that Miles Davis did not record as a sideman for just anyone. In fact, the number of times after 1950 that the trumpeter agreed to uplift another musician’s record can be counted on one hand, but Cannonball Adderley was not just “another musician.” Considered a sensation when he debuted in New York in 1955, Adderley’s brilliant technique and creative ideas were matched by his jubilant sound which was always full of joy and excitement. After leading a very enjoyable and commercially successful quintet during 1955-57,

Adderley became a member of the Miles Davis Sextet, playing next to John Coltrane. Cannonball would have phenomenal success with his own quintet in 1959 but he was already one of the greatest jazz musicians when he recorded his lone Blue Note album, Somethin’ Else in 1958. Joined by the Hank Jones Trio, this was the lone album that Adderley and Davis ever made together as the only horns. Among the five performances are very memorable renditions of “Love For Sale” and “One For Daddy-O.” The highpoint is what could be considered the finest jazz recording ever of “Autumn Leaves.” Davis’ melancholy tone proved to be the perfect contrast to Adderley’s joyful and exuberant playing which is overflowing with both creative ideas and pure enthusiasm. The classic music on Somethin’ Else is sophisticated and earthy, melodic yet full of constant creativity. This is a true gem.

You have never heard a digital version that sounds so amazing!

• • This Hybrid SACD is playable on ALL CD Players! 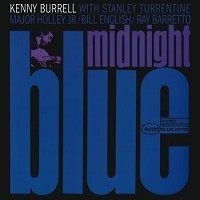