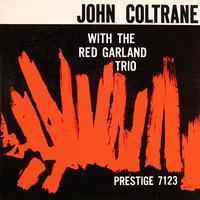 Chambers gets in on the action with an effervescent run that quotes the seasonal favorite "Santa Claus Is Coming to Town." The poignant "Slow Dance" is a dark ballad with a simple, refined tune that is established by Coltrane, then turned over to Chambers, then Garland, before the tenor brings it home with one final verse. Coltrane’s second original composition "Bass Blues" showcases Chambers’ ability to mirror even the most intricate or seemingly improvised lines from Coltrane.
And "You Leave Me Breathless" provides everything that a love song should with long, languid runs by Coltrane, Garland and what is arguably Paul Chambers at his absolute finest. The album draws to a close on a bebop lover’s dream — a fast and furious interpretation of the Irving Berlin classic "Soft Lights and Sweet Music." The original album title and cover with its abstract painting was changed in later pressings to "Tranein’ In," and revised to show a monochrome portrait of John Coltrane.