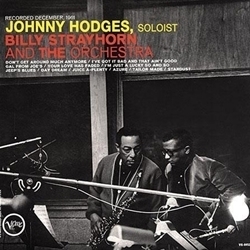 "...these are all truly classic Verve titles that you simply don't want to miss...most importantly, the sound of these reissues is nothing short of astounding. Particularly the early Billie and Ella mono records are incredible treasures of sonic beauty. I'd definitely ask Santa for the whole set, or, if you want to cherry pick, the most classic titles. Whatever you decide, you owe yourself at least a half dozen!" Winner of a  Positive Feedback Online Writers' Choice Award - Danny Kaey, Positive Feedback Online

Mastered by George Marino at Sterling Sound from the original master tapes to vinyl and PCM. The DSD was sourced from the PCM. George listened to all of the different A/D converters he had before he chose which to use, and he felt the George Massenburg GML 20 bit A/D produced the best and most synergistic sound for the project.

Recorded during the last decade of his long tenure with the Duke Ellington Orchestra, this album finds the great alto saxophonist Johnny Hodges's musical gifts not only intact but stronger than ever. Featuring the Ellington band with Jimmy Jones on piano and Billy Strayhorn as bandleader and arranger, it is a fascinating program of Ellington remakes, including some of the orchestra's most familiar numbers, all of which have been given subtle new orchestrations by Strayhorn and melodious new interpretations by Hodges.

Unfortunately, jazz fans in this century are forced to enjoy a concert by Johnny Hodges or Duke Ellington from the comfort of their television armchair. The climax of any of these recorded concerts is always found in the lyrical, gentle solos of the first-rate alto saxophonist. And one can see for oneself how seemingly effortlessly the notes just pour out of his instrument and how his restless eyes search contact with the audience. The melodies were almost always penned by Billy Strayhorn, Duke’s friend and alter ego.

For the jazz producer Norman Granz, it was a foregone conclusion to record an LP with the two lyricists. And for Johnny Hodges, who had already released more than a dozen LPs to his name, this particular recording was to be the summit of his career. The swinging, schmaltz-free carpet of sound of Duke Ellington’s orchestra might well be better likened to the swell and surge of a calm sea over which the archlike melodies are allowed to unfold. Such a mood is virtually impossible to express in words - which is logical - for if it was easy then musicians would be authors, not musicians ...

One shouldn’t be tempted to first pick out the new titles such as “Your Love Has Faded” or “Tailor Made” in the belief that there is nothing new to discover in such numbers as “Don’t Get Around Much Anymore”, “Day Dream” and “I’m Just A Lucky So And So”. That would be a real mistake - for it is precisely these catchy melodies, bedded in amongst the others, that make this album so exciting!

And just listen to these wizards from the Ellington Band: they obviously thoroughly enjoyed performing ‘in the background’ for a change instead of playing solo and standing in the limelight.
There is plenty of good to be discovered in Johnny Hodges (even if gossip has it that he was no angel!), but for that you need the recordings being available. 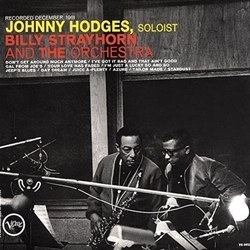