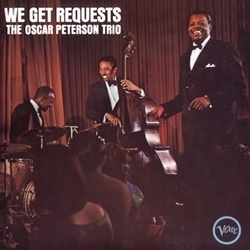 Analogue Productions release of this classic record. I saw that this was first released on a SCM disk from Japan so I figured that master tapes must be something special. I have a number of other Analogue Productions Jazz releases and have found all of them to be top quality. However We Get Requests is in my option the best sounding of all the old Jazz releases I own. The Bass and drums are completely realistic. Oscars piano is not quite to the same realistic standard, I’ll put that down to 1963 recording techniques. (If they could have made the piano float in the center ….well) Don’t let my small criticism of the piano keep you from this disc, this is highly recommended. The music is wondrously played. All three musicians are at the top of their game. I enjoy every track on the Album and find the realism to be “In the Room” well done Analogue Productions. Just as a side description, there’s a small Jazz Club in town that I frequent, This is a club were you can sit two feet away from the band, turn this SACD up a few notches above normal and it is very close to that “Live Jazz Club Sound” Sound 5/5 Sadnet

We Get Requests is a perfect example of Oscar Peterson's remarkable two-sided appeal. Technically, the album is filled with above average melodic development and solid rhythmic blend, while the repertoire is a crowd-pleaser. The listener is treated to a tasteful mixing of current pop tunes, standards and originals here while the Oscar Peterson Trio shows again why they're one of the best in the business.

Mastered by George Marino at Sterling Sound from the original master tapes to vinyl and PCM. The DSD was sourced from the PCM. George listened to all of the different A/D converters he had before he chose which to use, and he felt the George Massenburg GML 20 bit A/D produced the best and most synergistic sound for the project.

Playable in 3-channel. Mastered from the original 3-track tapes.

George Marino says the Verve masters are in excellent condition, with just one exception.

"The one problem we had was an Oscar Peterson one – We Get Requests," he says. "We played through it and there was a lot of weirdness going on, and the tape was really deteriorating. But what happened was they got the original three-track on that, and the three-track was great. So it all worked out in the end. That was the one tape that gave us a headache."

So imagine that. We Get Requests, of course, is a timeless audiophile classic. But the stereo master was shot. Given that we know the three-track hadn't been used before, this means that all those great reissues of this record to date? They were made from copies of the master. Now we get to hear the original three-track master!

"And it's the best sounding of all of them," Marino says. "Excellent sounding record."

Those reissues you've heard up until now – definitely still breathy, warm and rich – were made from something less than the master. Prepare to hear the veil removed.

This 1964 studio session features the Peterson trio with bassist Ray Brown and Ed Thigpen, a group that had been together for five years by then and performed like a well-oiled machine. The repertoire is mostly pop songs of the day, including bossa nova tunes and film themes, and the treatments are fairly brief, with emphasis placed squarely on the melodies. Even in their lightest moments, though, the group demonstrates some of the qualities that made it among the most influential piano trios in jazz, a group that could generate tremendous rhythmic energy and a sense of developing musical detail. For all his legendary force, Peterson possesses a subtle rhythmic sense, and here he infuses even "People" with an undercurrent of swing.