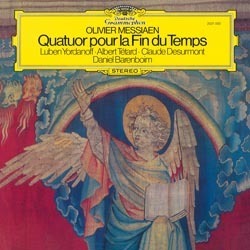 Messiaen: Quatuor pour la Fin du Temps -
Luben Yordanoff (v); Albert Tetard (vc); Claude Desurmont (cl); Daniel Barenboim (p, cond)
﻿The title alone "Quartet for the end of time" and the fact that it was composed in 1940, when war was raging, give one an inkling of the ominous background to the writing of this piece of music. Messiaen had been captured by the German army during the occupation of France and sent to a prisoner-of-war camp near Görlitz, where he was held for a long, hard year. He was permitted to have manuscript paper, and was able to compose the quartet. On 15 January he and three fellow prisoners were given the opportunity to perform the piece before an audience of about 400 prisoners.
Messiaen’s Quartet is not written in the classical four-movement form but as an eight-movement suite. Each section is a musical expression of programmatic meditation on the Creation and the Gospel according to St. John. The melodic writing is such that the listener is given a feeling of timelessness and endless space. Here, specific rhythms, which in contrast to 'classical' music have no set musical pulse, enhance the feeling that time is expanded and takes on a spiritual dimension. Messiaen thus creates a thoroughly new concept, which is in direct opposition to traditional compositional ideas of precise and regular metrics and structures, development and the genesis of forward-moving music.
There is certainly no more convincing performance of this exceptional composition, which was recorded in the presence of the composer and authorised by him.
Olivier Messiaen’s Quatuor pour la Fin du Temps may be the most celebrated chamber work of the 20th century. Written when Messiaen was a prisoner of war in Görlitz, and performed by the composer with three other POWs before a shivering audience of internees and guards in January of 1941, the Quatuor is not, as one might assume, primarily concerned with the Apocalypse. Rather, the “time” of the title is musical time: Messiaen was moving away from the metrical, more-or-less regular pulse that had characterized Western music for hundreds of years.
The piece has not hurt for good recorded performances. This late-1970s iteration, featuring Daniel Barenboim on piano and three less familiar players covering the string and clarinet parts, is idiomatic and technically unassailable. Other versions—TASHI’s is my favorite—are more dramatically vivid (more “ecstatic,” to use a term that appears in three of the work’s eight movement titles). Nonetheless, the long-limbed cello melody of the fifth movement is beautifully shaped and the sixth movement, entirely in unison, is a model of ensemble precision.
April 1978 im Masion de la Mutualité, Paris, von Klaus Scheibe
Produktion: Günther Breest
Luben Yordanoff, Albert Tétard, Claude Desumont, and Daniel Barenboim perform Messiaen's Quartet for the End of Time.
"DG's recording, and Speakers Corner's vinyl reissue, are quite realistic, with each of the four instruments properly scaled and consistently localized in space. Loud piano detonations hold together well." - Andrew Quint, The Absolute Sound.
Musicians:
Luben Yordanoff, violin
Albert Tétard, cello
Claude Desurmont, clarinet
Daniel Barenboim, piano
Selections:
Olivier Messiaen (1908-1992)
Quartet for the End of Time
1. Liturgy of crystal
2. Vocalise, for the Angel who announces the end of time
3. Abyss of birds
4. Interlude
5. Praise to the eternity of Jesus
6. Dance of fury, for the seven trumpets
7. Mingling of rainbows, for the Angel who announces the end of time
8. Praise to the immortality of Jesus
Browse this category: CLASSICAL
Contact information
Messiaen - Quatuor Pour La Fin Du Temps : Claude Desurmont: Daniel Barenboim - 180g LP - SCOTT NANGLE AUDIO
T&C's and Privacy Policy