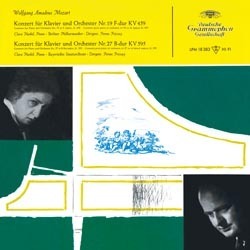 TAS Super LP List! Special Merit: Classical
"This reissue gives us a glimpse of the purity of tone and the precise phrasing that were hallmarks of Clara Haskil's playing, a style lost too soon in 1965, when Haskil sustained critical injuries in a fall from a train. Her friend Charlie Chaplin considered her genius on par with Albert Einstein's and Winston Churchill's." - John Crossett, www.theaudiobeat.com, 4/5 Music, 4/5 Sound!
Wolfgang Amadeus Mozart: Concertos for Piano and Orchestra No. 19 F major, K. 459 and No. 27 B flat major, K. 595
Clara Haskil and the Bayerisches Staatsorchester conducted by Ferenc Fricsay
﻿In spite of the varying degrees of popularity of Mozart’s numerous piano concertos, no one would seriously consider ranking them by quality. It would certainly prove an impossible task, for each and every one of these intense yet often playful compositions could be considered the most perfect of its genre. In view of this, one should concentrate on each work’s highly individual character and this can hardly be more contrasting than in the present two pieces. Thanks to the joyous, energetic disposition of No. 19 in F major, K. 259, it appears to be filled with the exuberant spirit of Mozart’s Viennese period – a time when he amazed audiences with his dexterity at the keyboard. As a contrast, the mood of the late No. 27 in B flat major, K. 595, which was performed in a small circle, is introvert and mellow.
The old adage that Mozart’s final concerto was a gesture of farewell and filled with a premonition of death is certainly not substantiated by Haskil and Fricsay’s performance. Through the subtle and flowing clarity of her piano part under the tense and elastic opposition of the orchestra, the soloist banishes the question of the end of time into the background and so pays hommage to the relaxed and self-assured mastery of the Salzburg composer.
While many good recordings of Mozart’s chamber music exist, I understand why Speakers Corner chose to reissue this one: Superb performances, a unique repertoire and sterling sonics make for a thoroughly enjoyable LP. - theAudiobeat
September 1955 in  Jesus-Christus-Kirche, Berlin, von Harald Baudis und Mai 1957 im Herkules Saal, München von Werner Wolf
Produktion: Wolfgang Lohse / Otto Gerdes
The Berlin Radio Symphony Orchestra with Ferenc Fricsay conducting performing Mozart Mass No. 18 in C Minor.
Musicians:
Radio Symphony Orchestra Berlin
Ferenc Fricsay, conductor
Choir of St. Hedwig Cathedral
Karl Forster, director
Maria Stader, soprano
Hertha Topper, alto
Ernst Haefliger, tenor
Ivan Sardi, bass
Selections:
Wolfgang Amadeus Mozart
Mass in C Minor K427
1. Kyrie
2. Gloria I. Teil
3. Gloria II. Teil
4. Credo
5. Sanctus - Benedictus