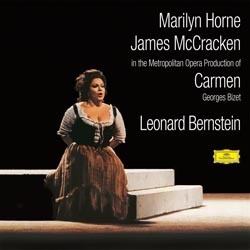 The Absolute Sound Super Disc List  -  TAS Harry Pearson Super LP List
hifi + - March 2015 Roy Gregory   Sound 9/10 Music 10/10
Carmen has always struck me as among the most accessible of operas: the French libretto & credible plot play to an Anglo-Saxon audience, the tunes are memorable, and you don’t have to wait too long for them to come along. But if you are in the re-issue game then where better to start? Speakers Corner has gone with DGG’s 1973 recording of Bernstein’s Metropolitan Opera production, captured at the Met itself. Its an interesting & unusual choice, not least because Bernstein chooses to use a score with considerable additional spoken dialogue.
Bernstein’s reading is slower of tempo & overall pace than many well-loved recordings of Carmen, ratcheting up the tension one notch at a time rather than dumping it on your lap. Nor is Home a match for the sultry Leontyne Price or the more multi-dimensional Victoria De Los Angeles, but then this is much more ensemble piece than a star vehicle, and in many ways it’s all the better for it.
“An excellent introduction to Carmen beautifully pressed and presented by Speakers Corner, this should be welcomed (and thoroughly enjoyed) by opera debutants and aficionados alike”. RG
Georges Bizet: "Carmen" - Marylin Horne, James McCracken, the Manhattan Opera Chorus and the Metropolitan Opera Orchestra conducted by Leonard Bernstein
his is a problem recording, and even fans of Leonard Bernstein and Marilyn Horne will find it odd writes a large mail-order media company about this "Carmen" production. However, discerning listeners who submerge themselves in the music will soon conclude that the problem is rather to be found among the many highly acclaimed and styled-up other recordings that present the fiery musical portrait as a sanitized, spirited indoor ballet. This is very different from Bernstein, who hints at the work’s inevitable tragedy already in the agonisingly weighty clashing cymbals of the surprisingly slow opening.
His rustic-sounding street scenes are filled with vaudeville, raw and authentic, and so typical of how people behave when they dance out-of-doors. This Carmen is far closer to the cracking "Westside Story" than a saturated "Traviata".
Marilyn Horne in the title role lends the full-blooded Carmen such an incredible voice in all manner of moods that one can hardly believe that we are listening to just one singer. One minute we hear the bright voice of a young girl lusting for life, and in the next minute the mezzo-like pained cry of a man-killing heroine.
James McCracken has a distinctive dry voice, which is full of rousing passion, and is ideal in the role of Don José. He is complemented by the dramatic, powerful baritone Tom Krause as the torero Escamillo.
Harry Pearson, the founder and former Editor in Chief of the specialist magazine "The Absolute Sound", accorded this outstanding recording a regular mention in his 'super disc' list – no problem!
Recording: ﻿September and October 1972 im Manhattan Center, New York  Günter Hermanns
Production: ﻿Thomas W. Mowrey
Musicians:
Marilyn Horne
James McCracken
Manhattan Opera Chorus
Metropolitan Opera Orchestra
Leonard Bernstein, conductor
Selections:
Georges Bizet
Carmen

Are your records completely analogue?
Yes! This we guarantee!
As a matter of principle, only analogue masters are used, and the necessary cutting delay is also analogue. All our cutting engineers use only Neumann cutting consoles, and these too are analogue. The only exception is where a recording has been made – either partly or entirely – using digital technology, but we do not have such items in our catalogue at the present time
Are your records cut from the original masters?
In our re-releases it is our aim to faithfully reproduce the original intentions of the musicians and recording engineers which, however, could not be realised at the time due to technical limitations. Faithfulness to the original is our top priority, not the interpretation of the original: there is no such thing as a “Speakers Corner Sound”. Naturally, the best results are obtained when the original master is used. Therefore we always try to locate these and use them for cutting. Should this not be possible, – because the original tape is defective or has disappeared, for example – we do accept a first-generation copy. But this remains an absolute exception for us.
Who cuts the records?
In order to obtain the most faithful reproduction of the original, we have the lacquers cut on the spot, by engineers who, on the whole, have been dealing with such tapes for many years. Some are even cut by the very same engineer who cut the original lacquers of the first release. Over the years the following engineers have been and still are working for us: Tony Hawkins, Willem Makkee, Kevin Gray, Maarten de Boer, Scott Hull, and Ray Staff, to name but a few.
At the beginning of the ‘90s, in the early days of audiophile vinyl re-releases, the reissue policy was fairly straightforward. Companies such as DCC Compact Classics, Mobile Fidelity, Classic Records and others, including of course Speakers Corner, all maintained a mutual, unwritten code of ethics: we would manufacture records sourced only from analogue tapes.
Vinyl’s newfound popularity has led many other companies to jump on the bandwagon in the hope of securing a corner of the market. Very often they are not so ethical and use every imaginable source from which to master: CDs, LPs, digital files and even MP3s.
Even some who do use an analogue tape source employ a digital delay line, a misguided ’80s and ‘90s digital technology that replaces the analogue preview head originally used to “tell” the cutter head in advance what was about to happen musically, so it could adjust the groove “pitch” (the distance between the grooves) to make room for wide dynamic swings and large low frequency excursions. Over time analogue preview heads became more rare and thus expensive.
So while the low bit rate (less resolution than a 16 bit CD) digital delay line is less expensive and easier to use than an analogue “preview head”, its use, ironically, results in lacquers cut from the low bit rate digital signal instead of from the analogue source!
Speakers Corner wishes to make clear that it produces lacquers using only original master tapes and an entirely analogue cutting system. New metal stampers used to press records are produced from that lacquer. The only exceptions are when existing metal parts are superior to new ones that might be cut, which includes our release of “Elvis is Back”, which was cut by Stan Ricker or several titles from our Philips Classics series, where were cut in the 1990s using original master tapes by Willem Makkee at the Emil Berliner Studios. In those cases we used only the original “mother” to produce new stampers.
In addition, we admit to having one digital recording in our catalogue: Alan Parsons’ “Eye in the Sky”, which was recorded digitally but mixed to analogue tape that we used to cut lacquers.
In closing, we want to insure our loyal customers that, with but a few exceptions as noted, our releases are “AAA”— analogue tape, an all analogue cutting system, and newly cut lacquers.
60 Years Pallas
Audiophile Vinyl - Made in Germany  For over 60 years the family business in the third generation of the special personal service and quality "Made by Pallas" is known worldwide. Our custom PVC formulation produces consistently high pressing quality with the lowest surface noise in the industry. Our PVC complies with 2015 European environmental standards and does not contain toxic materials such as Lead, Cadmium or Toluene. Our vinyl is both audiophile and eco-grade!
Browse these categories as well: CLASSICAL, Home page
Contact information
Bizet - Carmen : Marilyn Horne : James McCracken : Leonard Bernstein - 180g 3LP Box Set - SCOTT NANGLE AUDIO
T&C's and Privacy Policy