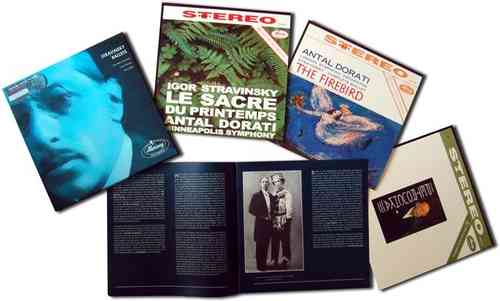 AAA 100% Analogue This LP was Remastered using Pure Analogue Components Only, from the Master Tapes through to the Cutting Head
Three famous and famous-sounding ballets by Stravinsky, all conducted by Antal Dorati - packaged together by Speakers Corner. Includes slip case and deluxe 12 page booklet.
"…I consider all three of these ballets to be 'must haves' in any classical musical library and the re-emergence of these now readily available and rejuvenated recordings is a cause for serious celebration…demonstration quality sound that is, in my opinion, harmonically and tonally near perfect, and not to be confused with the earlier Classic Records release…Speakers Corner Records has once again delivered a winning combination of performance, pressing quality and presentation. This set should be a keystone in every serious collection. Actually, let's make that every collection, period. These records really are too good to miss." – Richard S. Foster, Hi-Fi+,
A true revelation. Is this Speaker Corner album another legend in the making? Time will tell. Right now it deserves a Blue Moon Award. - 6Moons
"There's plenty of depth and imaging is naturally specific. instrumental timbres are richly characterized; violins are silky and the celesta sparkles. All three LPs have more timbral refinement and dimensionality than the excellent early 90s CD reissues." - Andy Quint, The Absolute Sound, October 2008, Issue 185
Musicians:
London Symphony Orchestra
Minneapolis Symphony Orchestra
Antal Dorati, conductor
Albums:
Mercury SR90216
TAS Rated 3/5 Music, 3/5 Sonics in the October 2008 Issue of The Absolute Sound!
Igor Stravinsky: Petrouchka/Antal Dorati/The Minneapolis Symphony Orchestra
Petrochka was born of Stravinsky’s vision of a long-haired musician hammering indiscriminately at the piano keys and engaging in a furious contest with the orchestra which answers with vehement protests and acoustic fisticuffs. As was the case with The Rite of Spring and The Firebird, Sergei Diaghilev and his Russian ballet had their share in ensuring that the “burlesque” in four scenes would be suitable for the stage.
The clown-doll Petrouchka revels in his spiteful teasing and pranks at the Shrovetide fair. The orchestra contributes swirling dance figures, blaring brass and scurrying strings to his high-spirited clownery – but then the Moor enters and dances with the Ballerina, arousing jealousy in Petrouchka. Although the clown-doll does not survive this bitter-sweet story, he triumphs at the end, his ghost mocking the crowd at the fair.
This highly inventive music combines folksong, popular music and the waltz, all bound together by exhilarating rhythms which are often taken to thunderous extremes. With its outstanding sound, this recording is a must-have in any Stravinsky collection.
Mercury SR90226
TAS Rated 4/5 Music, 3.5/5 Sonics in the October 2008 Issue of The Absolute Sound!
Igor Stravinsky: The Firebird/Antal Dorati/The London Symphony Orchestra
The Firebird can almost be described as a work of fate, since it is not only the first of several ballets that Stravinsky wrote for Sergei Diaghilev and his Ballets Russes but also marks his international breakthrough as a composer. In comparison with his other earlier stage works, the ecstatic, sharply contoured Rite of Spring for example, The Firebird, with its melodic character, is a far gentler work altogether. There are unmistakable reminiscences of the musical language of Rimsky-Korsakov and Tchaikovsky as well as snatches of late-Romantic harmonies; all this lends the music the charm of Russian tradition.
In his performance, Dorati chooses the golden mean in that he has his ensemble produce a highly colorful but by no means glaring sound. Thus the listener is given the opportunity to follow the development of the finely chiseled motifs which are so characteristic of this early composition. Happily, the chamber-music-like transparency is preserved even in the loud, more exposed passages – the sound leaves the loudspeakers with a sprightly, athletic tread, as it were.
Mercury SR90253
TAS Rated 4.5/5 Music, 4.5/5 Sonics in the October 2008 Issue of The Absolute Sound!
Igor Stravinsky: The Rite of Spring/Antal Dorati/The Minneapolis Symphony Orchestra
While he was finishing the score of The Firebird, the idea came to Stravinsky for a pagan, ritual scenario. The background history of Le Sacre du printemps is well known: while the modernists praised the work, the conservative public thought they were being hoaxed. The reason for their irritation and the scandalous fiasco of the premiere is still audible to this day. Stravinsky carries the aggressive, hammering rhythms to the extreme, casting them in atonal harmonies which feed on the alternation between a red-hot and a mild mixture, as Stravinsky put it.
Dorati urges on his ensemble with robust tempi, and the orchestra is quick to respond to all the refinements of the tightly knit movement. It appears to cope effortlessly with the extremes of contrast and manages to amalgamate the rhythmic excesses with the tenderness of the numerous tiny motifs and figures which seem to sprout like flowers out of hard rock. The excellent recording technique captures both the extreme loudness and the finely pulsating tones, resulting in a sound in which no detail goes unheard. The listener can be sure that this Stravinsky deserves the rating "excellent" – both for the interpretation and for the sound. 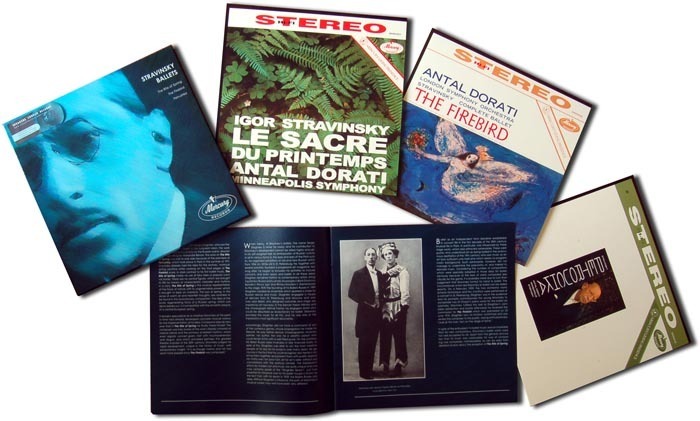