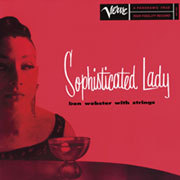 Featured in Michael Fremer's Heavy Rotation in the September 2004 Issue of Stereophile!

There were at least three good reasons for recording these 10 numbers: First, as a trained violinist, Ben Webster was the perfect candidate to be a part of a jazz with strings record. Second, without the meaty background of Duke Ellington’s Orchestra, Webster could effectively endow the luscious tonal hues of these ballads.

And third, there was the excellent arranger Ralph Burns, who here - far removed from earning his daily bread with Woody Herman - ensured that sheets of music brimming over with brilliant arrangements were to be found on the music stands of the soloist Ben Webster and the string players.

All of the numbers are romantic ballads penned by Johnny Mercer, Harold Arlen, George Gershwin, Duke Ellington and Billy Strayhorn. Although the tempo is slow and the strings provide a thick carpet of sound, there is nothing here that could possibly be described as "schmaltzy."

And this means that both jazz fans and romantic hearts will enjoy and praise this disc.

6. Do Nothin' Till You Hear From Me

7. Prelude to a Kiss 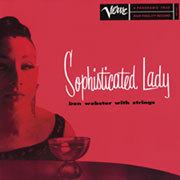