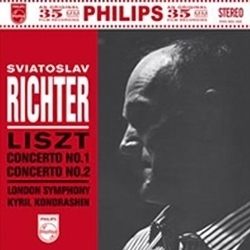 After finally being allowed to come to the West in 1960, Richter soon made LPs for CBS, RCA, DG, EMI and Philips. Extraordinary! His UK debut with Kondrashin was at the Albert Hall in July ’61 in Chopin, Dvorak and Liszt; the two Liszt Concertos (which you can find ‘live’, with the Hungarian Fantasy and Andante Spianato and Grande Polonaise, on BBC Legends 4031-2) were then produced over three days at Walthamstow Assembly Hall, by a Mercury team. .

The results subsequently have become the benchmark coupling.

At $30, this Speakers Corner reissue is an easy recommendation. Buy it new and immediately enjoy this very special recording Sound 9/10 Daily Audiophile

Any pianist who tackles Franz Liszt’s great works must possess outstanding skills in many areas. Technical prowess is absolutely necessary to play the extremely difficult score, as is immense physical energy  with the hefty onslaughts from the orchestra. But a great awareness of the unusual conceptual forms, refined energy and passion are also required to make the keyboard sing. At the beginning of the '60s Sviatoslav Richter seemed to possess all these attributes in an ideal equilibrium. With youthful energy he catapulted powerful chords against the First Concerto’s defiant theme in the orchestra, offering resistance only to join in later with the lyrical maelstrom of the orchestra. In the Second Concerto Richter exchanges heroic brilliance for an elegiac air, then becomes capricious with graceful arpeggios and a lyrical, firm melodiousness that fires the course of the work. In the Finale these twists and turns come together to form an emphatic single strand of spirited theme, brilliant cadenza and blustering orchestra.

"The sound is equally well balanced. The orchestra is arrayed behind Richter, and his piano sounds nothing short of tonally and dynamically realistic. The strings are at once serene and silky smooth, then jagged and harsh. The recording team captured it all beautifully, and the quiet pressing allows it to develop." - John Crossett, Theaudiobeat.com, 4/5 Music, 4.5/5 Sound!
Here the artists take the score as a starting-point, not some holy writ that must be adhered to at all-times, and mould performances of immense power and conviction. Sviatoslav Richter and Kyril Kondrashin treat Liszt’s Piano Concertos very seriously, where virtuosity is never used for anything other than expressive purposes. The first movement of the E flat Concerto is a genuine Allegro maestoso, with the lyrical episodes played very slowly and expressively. Kondrashin makes the start of the slow movement into an elegy, with marvellous string phrasing. Richter matches him in poetry and produces some breathtakingly soft and subtle trilling, while the finale is taken at a spacious tempo – it is marked Allegro moderato – with tremendous weight and attack; qualities that are magnified in the faster coda.
Musicians:
Sviatoslav Richter, piano
London Symphony
Kyril Kondrashin, conductor
Selections:
Franz Liszt (1811-1886)
1. Concerto No. 1 in E Flat Major
2. Concerto No. 2 in A Major
Recorded July 1961 at Walthamstow Assembly Hall, London, by C.R. Fine. 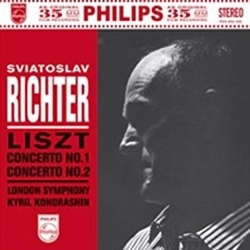