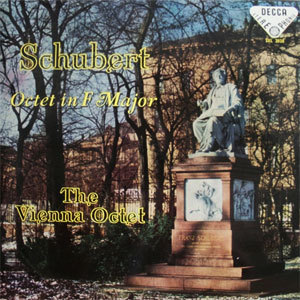 We audiophiles prize authenticity, and these LPs are created as authentically as reissues can be. Furthermore, they are pressed at Pallas on 180-gram vinyl, ensuring inky-black backgrounds, and Speakers Corner scanned original covers in order to re-create the artwork of each release. l initially press 1000 of each title, so get them while you can, before you're wondering why you can't find them anywhere - TheAudioBeat

Schubert’s light and flowing Octet in F major is of great importance in both an historical and a compositional aspect. Thanks to its combination of string and wind instruments, it is akin in character to the cheerful divertimento and the contemplative serenade. That the commissioned work is very similar to Beethoven’s popular Septet op. 20 with regard to the individual movements and the key relationships is by no means accidental – that was what was ordered.

Schubert occupied himself with the almighty giant’s composition, though for a different reason: with his own Octet he wanted topave his way towards writing a great symphony, whose dramatic force and form is clearly suggested here.

Steeped in the musical traditions of the city on the Danube, the Vienna Octet is the ideal ensemble to perform this work. Led by Willi Boskovsky, who became world famous as concertmaster of the Vienna Philharmonic Orchestra and conductor of the New Year’s Day Concerts, the ensemble plays with great agility, joy and togetherness from the first note on. The sound of each individual instrument comes over vividly in a natural, chamber-music-like atmosphere.

Schubert: Octet in F Major, D.803, performed by the Vienna Octet (Decca SXL 2028), recorded in Vienna in 1958, produced by John Culshaw; remastered from the original two-track analog tape by Tony Hawkins, for LP reissue by Speakers Corner of Gettorf, Germany. This reissue house remains the one to beat, and their recent Schubert Octet exemplifies their greatest strengths. Were I to select an example of realistic instrumental textures and believably saturated timbral colors in recorded music, this is the record I would reach for. Extra points for a perfectly aligned spindle hole (also a Speakers Corner characteristic), without which the sustained notes of the introductory bars would be far less listenable.

Speakers Corner even sweats the graphic details: On the record labels of the original Decca classical recordings, the catalog number is shadowed by a four-digit number with the prefix ZAL, usually printed upside down (although, on at least one '70s-era original in my collection, it's right-side up): That's the unique number for the master tape used to cut that side, and Speakers Corner reproduces that, too—as much to ensure that they, too, have used the correct tape as for a touch of authenticity. Nice. - Stereophile