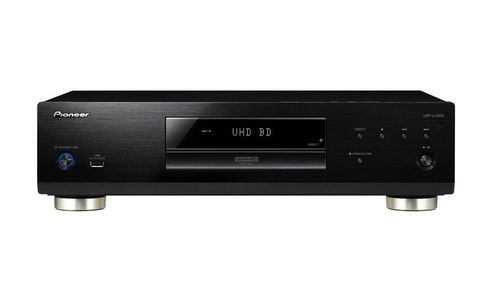 Pioneer UDP-LX500 4K Blu Ray Player - To get the very best quality for your home cinema you need a dedicated 4K Universal Player, the beauty of the UDP-LX500 is that it has also been optimised for Music playback making it a truly universal player.

Pioneer’s premium 4K player delivers a double whammy of superb picture and awesome sound quality. If your system warrants it, buy with confidence 5/5 What Hifi

Introducing the Pioneer UDP-LX500, the latest universal disc player that will play all your Blu-ray discs, including UHD Blu-ray, as well as CDs and SACDs

The UDP-LX500 features a low resonance design, tweaked especially for high-speed UHD Blu-ray playback. An Acoustic Damper tray sits within a rigid double-layered chassis with a 3mm steel top plate. The deck tips the scales at 10.3kg. The player's remarkably rigid construction, as well as a lower centre of gravity,  suppresses vibration transmission occurring inside the player, and so minimising any potential resonances generated and so improving disc playback.

As well as delivering excellent movie sound, the UDP-LX500 has also been engineered to be a superb audio-only player. It uses the AKM AK4490EQ DAC chip for stereo DAC duties with three digital filtering modes (Sharp Roll-Off, Short Delay, Slow Roll-Off). Pioneer does state that they have mitigated the spurious noise around the power supply and GND as much as possible and that "the circuit has been tuned to give a rich, fulsome tone of sound".

The UDP-LX500 is compatible with both SACD and DVD-Audio discs and is High-Res able.

The UDP-LX500 has three HDMI output modes: The Separate mode separates sound and vision via the main/sub HDMI outputs; a Single mode routes both video and audio output via the primary HDMI output, while a Pure Audio mode delivers an audio-only output from the sub HDMI terminal.

There is also an SDR/HDR Preset to optimise the video output according to display, adjustable between LCD TV, OLED and Projector.