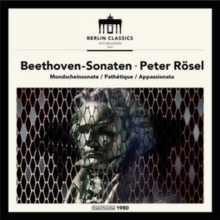 Beethoven’s piano sonatas are part of the standard keyboard repertoire. The three favourites, whose legendary status has earned them their lasting popularity, are the “Moonlight Sonata”, the “Appassionata” and the “Pathétique”. Here they can be enjoyed in great performances by pianist Peter Rösel.

“When, at the end of the 1970s, I was asked by the head of production at Eterna to record these three famous Beethoven sonatas, I wanted a little time to think about the proposal before accepting. That was because in the GDR you were expected to exceed the achievement of a record already released featuring the same works. The performer on the existing recording was Wilhelm Kempff, so the bar for a young pianist was set pretty high.

Nevertheless, I decided to go ahead ... and accept the challenge. Without wanting to seem immodest, I can say that I was pretty satisfied with the result, and I still am today.