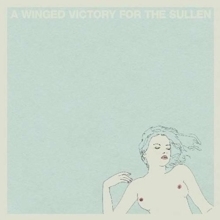 The grandiloquently named project of a pair of blue riband mood-casters, A Winged Victory for the Sullen combines the talents of Italophile Californian pianist Dustin O'Halloran and Stars of the Lid's ambient drone-meister Adam Wiltzie, another American who these days calls Europe (Belgium, in his case) home. True to their chosen moniker, the music that this cosmopolitan duo fashion regularly takes wing and it's certainly a victory for subtlety, sensitivity and judiciousness over broad, flashy musical brushstrokes. Sullen, mercifully, it is not.

O'Halloran and Wiltzie (there's a buddy cop show waiting to happen, surely?) were drawn together in Bologna, Italy, at one of the final shows by the late Mark Linkous' much-revered Sparklehorse, with whom Wiltzie was touring (indeed, the two-part Requiem for the Static King, which lies at the heart of this seven-essay album, is dedicated to Linkous). Both enamoured of piano-based atmosphere and understated chamber orchestration (not to mention fine continental cuisine, apparently), the duo bonded in a number of European studio locations, fleshing out their crepuscular electronic keyboard drones and elegantly restrained piano motifs with lavish strings from the ubiquitous Peter Broderick and Icelandic cellist Hildur Gunadtir.

The results are, almost inevitably, meditative and cinematic, but also, more unusually for music of this so-called 'post-classical' stripe, rich in melody and genuinely haunting, numinous atmosphere. Thus, tremulous, pensive opener We Played Some Open Chords, while doing exactly what it says on the proverbial tin, sounds like a particularly brooding Harold Budd  sporadically weighted with Gavin Bryars-like orchestral gravitas, the latter tonalities warding off the chocolate boxy prettiness to which O'Halloran's solo works are occasionally prone.

The aforementioned, two-part Requiem for the Static King follows, its melancholy, Stars of the Lid-like drift/drone-scaping proffering a rapturous, John Dowland-meets-Brian Eno, Renaissance-ambient tone bath in which it is impossible not to become totally immersed. The ensuing Minuet for a Cheap Piano Number Two blends further geodesic drones with stately piano figures and updrafts of swooning, soaring cello - again recalling Gavin Bryars (particularly his masterful The Sinking of the Titanic), while the marvellously titled Steep Hills of Vicodin Tears, the highlight here, builds from muted electronic static to a gorgeous, near symphonic climax.