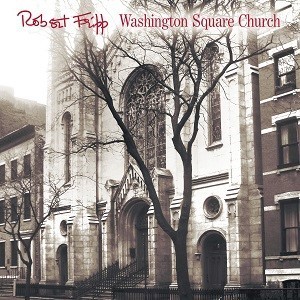 Mixed and Produced by David Singleton from audio restored by Alex R. Mundy •

Vinyl cut by Jason Mitchell at LOUD mastering • The finest example of Frippertronics in performance.

After completing the first round of concerts with a revived King Crimson, Fripp headed over to the USA where he began a week-long residency at Washington Square United Methodist Church on 135 W Fourth Street in New York. Built in 1860, the church had historically been home to many congregations but in more recent years had become the venue for groups such as the Black Panthers, Gay Men’s Health Crisis and numerous arts organisations.

The series of Frippertronic concerts were held in aid of a Soho-based theatre group and they find the guitarist using his technique of slowly building he music from the ground up, step by step. It’s an approach which demonstrates how the addition or subtraction of a single note can change the entire mood of a piece as we move in the space of a few bars from an atmosphere of pensive anticipation to one of yearning hope.

Perhaps of greater interest to long-term fans of the genre is the introduction of cyclical lines in Test Loop and Solo which remind one of the way they infused his Discotronic pieces (as heard on Under Heavy Manners), and which formed the musical spine of much of the League of Gentlemen and Discipline/King Crimson. There are moments when Fripp sounds like he’s running against a clock, the notes only just managing to keep pace with the tempo of the returning echoes. There’s a moment where a sequence of laser-beam like notes presages the tumbling melody of Easter Sunday - still a couple of years from being formally recorded.

The temperature really rises on Loop I and Solo however as Fripp’s solo lines tear ragged strips out of the air. There are points when notes appear to be scooped from a slurry of buzz, static and signal decay, and thrown into the air to be transformed into dazzling lines of gleaming beauty. How does he do this? Where does it come from? Answers on a postcard please...