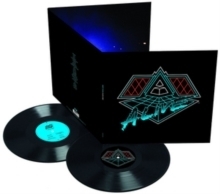 Alive 1997 reveals the French duo Daft Punk as one of the brightest entertainers in the occasionally stale world of album-based electronic dance. True, techno and house DJs can light up a crowd like few others, but the increasing artist slant of electronica often results in push-button programming and straight-from-DAT live performances, with most of the heavy lifting relegated to the lighting supervisor and effects computers.

This brief glimpse at Daft Punk's live show circa 1997 (their major breakout year) is a tour de force of high-energy theatrics and flair. Aside from the pair of "WDPK" interludes, Alive 1997 includes only three tracks, but they're so radically different from their album versions that they're only barely familiar. The duo's biggest hit so far, "Da Funk," is stretched out to 16 minutes with a start-and-stop improvisation section that brings the crowd to a peak, while "Rollin' & Scratchin'" never looks back after breaking right on through the red-line.

An energizing document, Alive 1997 is one of the few live records to approximate the excitement of the original live show.