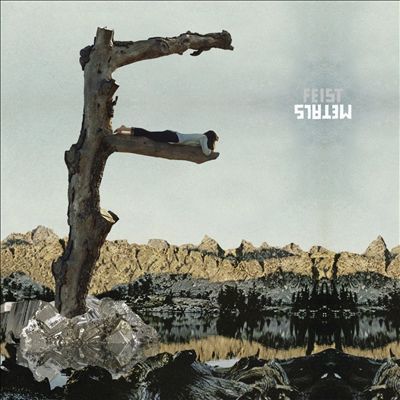 With Metals, Feist responds to the surprise success of 2007’s The Reminder with a whisper, not a bang. She treads lightly through a series of disjointed torch songs and smoky pop/rock numbers, singing most of the songs in a soft, gauzy alto, as though she’s afraid of waking some sort of slumbering beast. Whenever the tempo picks up, so does Feist’s desire to keep things weird, with songs like “A Commotion” pitting pizzicato strings against a half-chanted, half-shouted refrain performed by an army of male singers. But Metals does its best work at a slower speed, where Feist can stretch her vocals across fingerplucked guitar arpeggios and piano chords like cotton. “Cicadas and Gulls,” with its simple melodies and pastoral ambience, rides the same summer breeze as Iron & Wine, and “Anti-Pioneer” breaks down the blues into its sparsest parts, retaining little more than a sparse drumbeat and guitar until the second half, where strings briefly swoon into the picture like an Ennio Morricone movie soundtrack.

They’re gone after 30 seconds, though, leaving things as quiet as they began. Like the rest of the subdued track list, “Anti-Pioneer” is unlikely to find itself featured in an iPod commercial, meaning Feist’s days as a provider of hip, trendy TV jingles may be over. Still, there’s a soft-spoken power to Metals, even if its songs are more liquid and atmospheric than the title suggests.

Over the course of her commercially available solo albums to date, Leslie Feist has expertly balanced the weighty with the whimsical; the heavyhearted with the straight-up joyful. On 2004's Let It Die she offset the mournful shades of its title-track with the sublime Mushaboom, while 2007's breakout LP The Reminder boasted a brace of affecting, minor key numbers alongside the wonder of 1234 (briefly ubiquitous after featuring in an iPod nano commercial).

Following a month spent arranging her new compositions in Toronto, she and long-time collaborators Chilly Gonzalez and Mocky decamped to a self-built studio in a "giant open space" they discovered on the coastline of California's Big Sur to record Metals, and the results are suitably robust. The Bad in Each Other opens proceedings in a flurry of metronomic drums, guitars and sax all jostling under Feist's emphatic delivery, until her tone softens come the chorus in order to rue the often damaging side-effects of love and attraction. Focusing on universal emotions and filtering them through her own experiences, she has come up with a startling set of songs here; one that reflects the wild surrounds of its gestation and equates them with the chaotic nature of modern life and relationships.
So, there is nothing quite as uplifting as those previously mentioned numbers, but Metals remains as wonderfully organic and distinct as its predecessors, swerving from svelte, lilting numbers like How Come You Never Go There? to the abrasive, stabbing strings of A Commotion (one of Feist's noisiest to date), and the sparse, dreamy, simple-as-you-like Cicadas & Gulls or Get It Wrong Get It Right. It is earthy and raw, replete with strings, horns and ivories that purposefully move from one pole to the other yet rarely tip into indulgence. Backing vocals throughout range from the raucous to the barely perceptible, underlining how much of a group effort this is. As made clear on last year's documentary Look at What the Light Did Now, Feist's core collective is very much a long-standing unit.
On top of all this, she is in the form of her life: whether providing Comfort Me with its wicked central lyric, cooing atop haunting album centrepiece Anti-Pioneer or echoing the bluesy guitar line that snakes it way through Undiscovered First, you get the impression that this rough gem of a record is exactly what she intended from the outset.
Track Listings
1. The Bad In Each Other
2. Graveyard
3. Caught A Long Wind
4. How Come You Never Go There
5. A Commotion
6. The Circle Married The Line
7. Bittersweet Melodies
8. Anti-Pioneer
9. Undiscovered First
10. Cicadas And Gulls
11. Comfort Me
12. Get It Wrong, Get It Right
Browse this category: ROCK & POPULAR
Contact information
Feist - Metals - 180g LP - SCOTT NANGLE AUDIO
T&C's and Privacy Policy