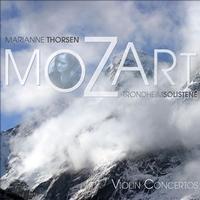 Stereophile’s “Records to Die For”.-  This high-quality recording won a Norwegian Grammy for Best Classical Album

This recording was made using 352.8kHz/24bit DXD resolution, in Selbu Church in Norway in 2006 and in 2008 was named by Stereophile as one of their “Records to Die For.” Since the vinyl hadn’t been released at that time, I’m not sure whether the record in question was a 2L SACD or standard CD, but anyway the original DXD recording has been transferred to the cutting lathe as a hi-res analog signal and used to make this direct metal-mastered 33⅓ LP.

These Mozart violin concertos are considered to be some of the most elegant in the entire history of music. Each is three movements, beginning with an Allegro and ending with a Rondeau movement. The Trondheimsolistene are amazingly precise and accurate in their playing, yet with plenty of emotional communication. And the extremely high fidelity standards of 2L bring the experience of both concertos to new heights. There is a well-know EMI vinyl of both concertos performed by David Oistrakh, but naturally the fidelity doesn’t even approach the clarity of this magnificent recording.

This recording, conducted by Oyvind Gimse, has already received its share of accolades. That's because it was originally released in CD/SACD back in 2006. Since then, it won a Norwegian GRAMMY as Best Classical Album, and Kalman Rubison of Stereophile chose it as one of his "Records to Die For" back in 2008. So you may already know this recording well. But as usual 2L's DXD 352.8kHz/24bit Direct Metal Mater 180g audiophile grade vinyl pressing is the real news here, and if there's a reason to still listen to vinyl...this is undoubtedly it.

With this recording we wish to present a fresh version of the most elegant violin concertos in the history of music. While respecting the origin and tradition of this music, we have sought a new and dynamic musical experience rooted in our present time. To us, Mozart is as solid as rock, as soft as snow, and as clear as ice; this recording embraces the listener in a sonic world that invites him or her to participate actively in the experience, in close and mutual interaction with the soloist and the orchestra. Only in this way can we genuinely express our love of Mozart's music. Side A - Concerto no. 4 in D major KV 218 1 Allegro 9:14 2 Andante cantabile 7:51 3 Rondeau - Andante grazioso 7:27 Side B - Concerto no. 3 in G major KV 216 1 Allegro 9:54 2 Adagio 8:47 3 Rondeau - Allegro 6:32 This recording was declared a ”Record to Die For” by STEREOPHILE Magazine and won the Norwegian GRAMMY as Best Classical Album. In an international blind test 34 out of 50 listeners chose Marianne Thorsen and TrondheimSolistene as their favorite, over established references in Mozart's violin concertos. Experience the sonic- and musical miracle now on vinyl! Direct Metal Master 180g audiophile grade vinyl from original DXD (352.8kHz/24bit) recording