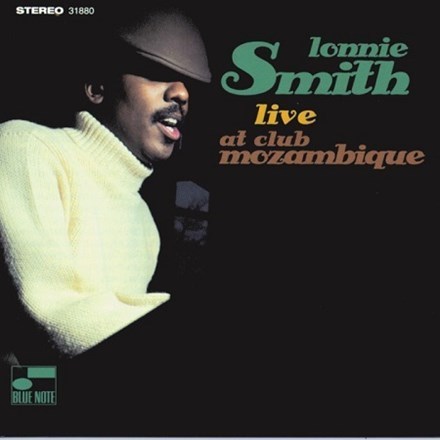 This Blue Note 80 Vinyl Edition is all-analog, mastered by Kevin Gray from the original master tapes, and pressed on 180g double vinyl at Optimal.

After releasing his debut album Finger Lickin' Good for Columbia, organist Lonnie Smith joined Lou Donaldson's band and made his first Blue Note appearance on the saxophonist's hit 1967 album Alligator Boogaloo. Two more Donaldson dates followed (Mr. Shing-A-Ling and Midnight Creeper) before Smith was offered his own Blue Note deal, making his label debut with Think! in 1968. Smith went on to record another four Blue Note albums over the next two years

(Turning Point, Move Your Hand, Drives and Live at Club Mozambique) all of which are regarded as soul-jazz classics. Recorded in Detroit, MI in May 1970 but not released until 1995, the relaxed and funky Live at Club Mozambique features an ever tasteful George Benson on guitar and finds Smith in full command with a strong set dominated by six of his own originals.