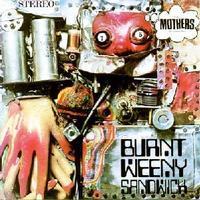 The reissue proves more transparent and presents the music on a deeper soundstage than the original. I can now really appreciate how much care Zappa took with the vocal arrangements on the doo-wop tunes that open and close the album, and remain surprised by the new things I hear in a record I’ve owned for more than 40 years. Sound 4.5/5 Vinylreviews

Mastered for this release by Bernie Grundman - Pressed At Pallas Germany

Unavailable on vinyl for more than three decades!

Over the last several years, the Zappa Family Trust and Universal Music Enterprises have lovingly been restoring Frank Zappa's iconic catalog together by reissuing his classic albums on CD, pressing long-out-of-print records back on vinyl and digitizing the prolific composer's vast repertoire.

Next up in the ongoing vinyl initiative is Zappa's enigmatic Burnt Weeny Sandwich which will receive a 180-gram audiophile repressing on black vinyl on June 22 via Zappa Records/UMe. Supervised by the Zappa Family Trust, the record was specially mastered for this release by Bernie Grundman with all analog production and cut directly from the 1970 ¼" stereo safety master tape in 2018. Unavailable on vinyl for more than three decades