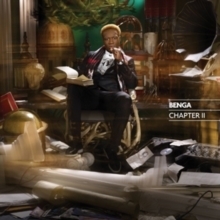 dubstep pioneer underscores influences from the best club styles with his unique rhythmic know how.

opening with a musical laser show of slick synths, heavy beats & a perfect balance between pop & muscular dancefloor clout, benga’s flawless production finesse doesn’t crack from beginning to end. fittingly ‘i will never change’ looks to the sub wobbles & half step beats he made his name with & ‘to hell & back might just dispose of a few speakers. "it's striking just how skilfully structured the pieces are, how they are able to disintegrate into the most spectral, granular moments without ever losing sight of where they've been & where they are going"

dubstep self portrait is in some ways just what you’d expect it to be – hyper-masculine severity dressed up in market stall street wear – but it can be telling nevertheless.

The cover for Skream! caught the teenager looking as fresh-faced as his debut sounded and Joker went from looking like the pensive sort on the ‘Snake Eater’ single to dazed as the world rushed past him on The Vision – which is apt, considering his work is still stuck in 2009. Dismiss it as a spurious observation if you like, but putting an image of yourself on your album opens up an element of criticism about self-representation that would be otherwise disregarded, and when it’s flaunted in a way that borders on narcissism, you have to wonder what the motivation behind and long-term aim of doing so really is.