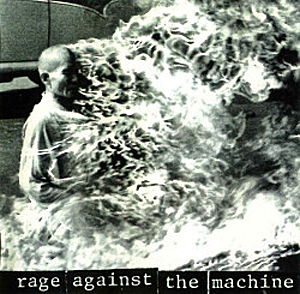 Pissed off and angry is the best way to describe Rage Against the Machine's first album. A fierce mix of hip-hop, punk & heavy rock exploded all over the music scene in 1992.

At first sight an unlikely band; Tom Morello, a nerdy guitarhero who played his guitar like a DJ, political activist Zack de la Rocha who spitted out his lyrics with a vengeance. Together with Brad Wilk on drums and Tim C. on bass they produced one of the most angry records of 90's.

The album even contained, dare we say it, hitsingles like Killing in the name of and Bullet in the head. Put the needle on the record and get blown away (again)!

Probably the first album to successfully merge the seemingly disparate sounds of rap and heavy metal, Rage Against the Machine's self-titled debut was groundbreaking enough when released in 1992, but many would argue that it has yet to be surpassed in terms of influence and sheer brilliance -- though countless bands have certainly tried. This is probably because the uniquely combustible creative relationship between guitar wizard Tom Morello and literate rebel vocalist Zack de la Rocha could only burn this bright, this once. While the former's roots in '80s heavy metal shredding gave rise to an inimitable array of six-string acrobatics and rhythmic special effects (few of which anyone else has managed to replicate), the latter delivered meaningful rhymes with an emotionally charged conviction that suburban white boys of the ensuing nu-metal generation could never hope to touch.

As a result, syncopated slabs of hard rock insurrection like "Bombtrack," "Take the Power Back," and "Know Your Enemy" were as instantly unforgettable as they were astonishing. Yet even they paled in comparison to veritable clinics in the art of slowly mounting tension such as "Settle for Nothing," "Bullet in the Head," and the particularly venomous "Wake Up" (where Morello revises Led Zeppelin's "Kashmir" riff for his own needs) -- all of which finally exploded with awesome power and fury. And even listeners who were unable (or unwilling) to fully process the band's unique clash of muscle and intellect were catered to, as RATM were able to convey their messages through stubborn repetition via the fundamental challenge of "Freedom" and their signature track, "Killing in the Name," which would become a rallying cry of disenfranchisement, thanks to its relentlessly rebellious mantra of "Fuck you, I won't do what you tell me!" Ultimately, if there's any disappointment to be had with this near-perfect album, it's that it still towers above subsequent efforts as the unequivocal climax of Rage Against the Machine's vision. As such, it remains absolutely essential 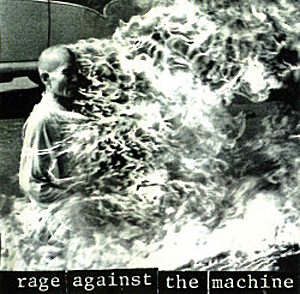